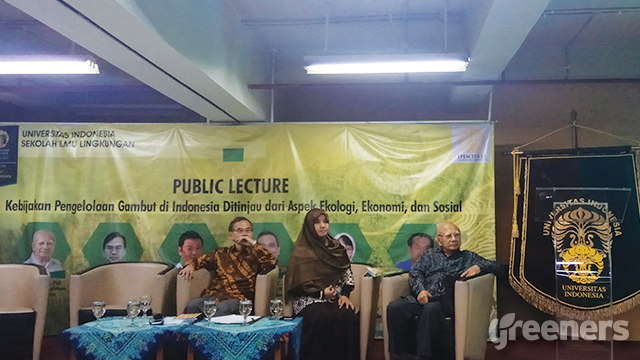 Jakarta (Greeners) – Senior adviser of Ministry of Environment and Forestry on Tuesday (27/2) said that peatland protection and management is important for Indonesia to reduce 29 percent and 41 percent by 2030 as committed under Paris Agreement.

“Post 2020, Indonesia is planning to increase its target from current commitment referring to latest research on greenhouse gas emissions,” said Nur Masripatin, senior adviser of Ministry of Environment and Forestry, in Jakarta.

Based on First Biennial Update Report (BUR) submitted to United Nation Convention on Climate Change (UNFCCC) on January 2016, national greenhouse gas emissions reaches a total of 1,453 gigaton CO2e in 2012 with an increase of 0,452 GtCO2e from 2000. The major contributions came from Land Use Change Forestry and peat fires (47.8 percent) and energy sector (34.9 percent).

In 2015, emission had increased because of land use, land use change and forestry and forest fires though followed by drastic decline in the following year. Based on Third National Communication Indonesia data, CO2 emission from peat fires reached 32 percent of total emissions from forestry and other land uses or 17 percent out of total 1.84 GtCO2e in 2014.

“If emission reduction [action] is not taken then it will impact our own people in the long term. There will be more losses than benefits if we don’t manage peatlands as the last data stated it’s the largest emission contributor,” said Masripatin.

Based on National Determined Contribution (NDC), forestry sector has to reduce deforestation rate to less than 0.45 to 0,325 hectares in 2030, implement good sustainable forest management in natural forests and in plantation forest, rehabilitate 12 millions lands degraded in 2030 or 800,000 hectares per year with survival rates of 90 percent and restore two millions of peats in 2030 with survival rate of 90 percent.