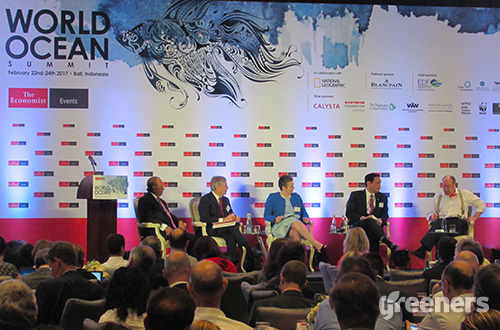 Coordinating Minister of Maritime Issues, Luhut Binsar Panjaitan, said that with its status as a nation with more than 17,000 islands, Indonesia has been committed to deal with issues such as over fishing and illegal fishing, plastic waste and educational programs on ocean.

“Education is important as without it, problems of oceans will not be recognized or let along being solved. To understand about the environment, people must know what is environment. It is to prevent more damage. On ocean, we will be focusing on infrastructure and of course, tourism,” said Panjaitan, at the World Ocean Summit 2017, in Nusa Bali, on Thursday (23/2).

Furthermore, he said that economic growth must be in line with environment conservation and sustainable marine investment as Indonesia has understood its environmental responsibilities.

In addition, infrastructure development would be the main concentration considering vast islands of the country.

“So, we will start with infrastructure, we will develop sea tolls to strengthen our economy. But, at the same time, our economic growth increase,” he said.

Bangladesh, which has established a national committee on climate change and took up active role at Conference of the Party/United Nations for Climate Change Conference (UNFCCC), was hoping that climate change, especially blue carbon, emitted from oceans, can draw attention to all parties, developed and developing countries.

“World Ocean Summit 2017 is important for Bangladesh and I agree for a balance growth. However, at the same time, we could not ignore the impacts,” he said. “That is why we have issued many regulations to support these two as we realized both are important for the world.”

Ana Paula Vitorino, Portugal’s Minister of Fisheries, has different perspective on marine issue. Vitorino said from young generation, marine issues, may it be economics, conservation, or waste, will generate interests.

She said internet era, where connectivity was fast, the government could no longer apply conservative approach on the issue.

“We are not just talking about over fishing or ocean waste but we also talk about traditional culture, energy such as liquid natural gas (LNG) and many more,” she said. “We also prepare our country on education programs, such as Ocean Literacy as industry world needs to shift its direction. Look at transportation sector, they have been eyeing on water.”

The Economist World Ocean Summit is a global conference on ocean issues attended by more than 300 participants of 58 countries, including ministers of ocean countries, investors, business leaders, young generation focusing on oceans, civil organizations, and scientific community, on building constructive dialog and create solution based on blue economy.