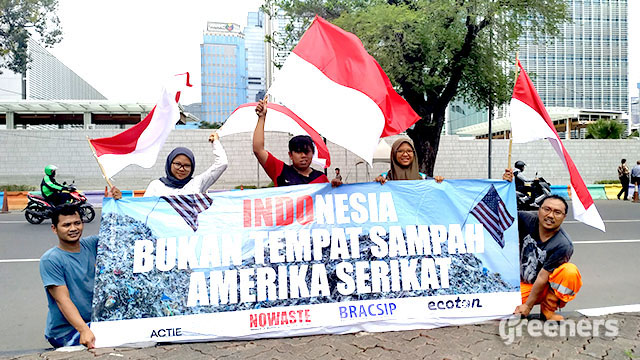 Jakarta (Greeners) – Following protest from green group, Ecoton, to US embassy over recent illegal waste dumping to Indonesia, US representative stated that they regretted the fact that containers shipped from the country contaminated with domestic wastes.

“After investigating the matter, we are regretful knowing that the containers arrived in Indonesia contained scraps of contaminated waste. We respect Indonesian government to enforce its environmental law and imports. We hope all US companies to comply with local, national, and industrial guidance,” as stated in the email.

“Lots of Indonesian companies rely on imports of high quality scraps for their business to grow and expand employment for Indonesians. To use recycle materials means that Indonesia will not have to cut down trees and extract more oil. Hopefully, this illegal attitude of several companies will not hamper opportunities for Indonesia to develop its manufacture industry based on recycle commodities.”

Prigi Arisandi, Ecoton Executive Director, said that if US wants to support recycles, they should do it according to the law, and not illegally smuggled domestic waste into the country.

Furthermore, US government had violated Ministry of Trade Regulation issued in 2016 and Waste Management Law issued in 2008, as Indonesia had re-export them back to the US.

“We have to understand if Indonesia ban domestic plastic waste, waste from sanitary landfill. The US can export plastics but in the form of plastic scraps or post-production waste so the type of the waste will be divided into PET, PP, PE, and PETE,” said Arisandi to Greeners on Thursday (25/07/2019).

Meanwhile, other developing nations, also shipped with illegal wastes, have re-export them back to the US and protested to developed countries on the issue.

Cambodia returned 1,600 tons of contaminated waste to the US and Canada on July 17, 2019 after they found them in 83 containers in Sihanoukville State Harbour, as reported by CNN.

“Cambodia is not a dumpster for foreign countries to dump their e-wastes in our country and the government will refuse plastic waste imports and oil recycle in this country,” said Neth Pheaktra, the state secretary and spokesperson for Ministry of Environment to CNN.

Malaysia also had the same attitude, as reported by Voaindonesia, Yeo Bee Yin, Minister of Energy, Technology, Science, Environment and Climate Change, stated will enforce the law for recycling facilities and illegal import activities, and calling them involved in the incident as ‘traitors’.

“This is not fair and inhumane. We will return those wastes to their origins without questions. Malaysia will not become the world’s landfill. We will not be bullied by developed countries,” said Yeo Bee Yin.