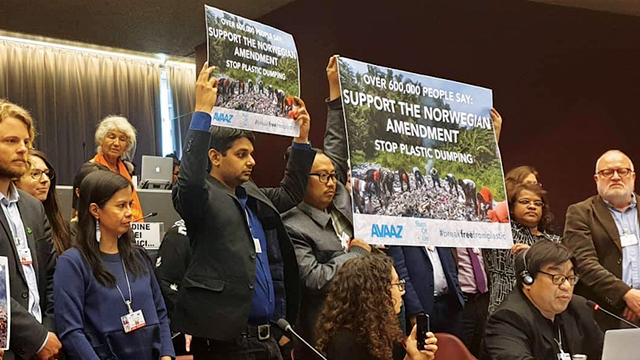 Jakarta (Greeners) – At least 187 nations took one massive step to control plastic trade crisis by including plastic in Basel Convention, a treaty which controls waste and hazardous waste movement from one country to other country, especially developed country to developing country.

On May 10, United Nations for Environment or UNEP in Geneva, Switzerland, agreed on the amendment of Basel Convention to request plastic waste exporter to have consents from recipient countries. The amendment is an important tool to stop unwanted plastic waste disposal from developed countries to developing countries.

“This year’s Basel Convention is encouraging countries which export plastic waste to send letters beforehand on what type of plastic so that the recipients will be able to look at the quota and its ability to recycle plastic waste. If they’re approve and agree then they can shipped them, if not then the recipients have the right to reject. So, it is basically right to know, not just sent them over,” said executive director of Ecoton, Prigi Arisandi, in Jakarta on Thursday (16/05/2019). “Second, plastics that are sent must be clean because all of this time developed countries only want to sent but not sort them out. Those two keys must be known.”

Arisandi said that plastic waste disposal issue has yet to be regulated specifically in Indonesia. In the customs, director general of customs only applies green line and red line to check on the products entering the country.

“In our customs, the products and ingredients must be checked not just scanned through two categories, green line and red line. But, because we need those import products, they are included in the green line, meanwhile they’re bad quality, there are various contamination, such as hazardous materials, drugs substances, and other. Hence the smuggling because the entrance permit only based on those two categories,” he said.

Furthermore, he said that Basel Convention can reduce pollution in lands and oceans in Indonesia.

Despite of the amendment receive supports, there are countries oppose plastic waste in the Annex II of Basel Convention, such as US, the largest plastic waste exporter in the world.

American Chemistry Council, lobbyists from petrochemical industry in the US, and Institute of Scrap Recycling Industries, an association for waste business brokers.

“Just a reminder that this convention is not sanction, especially if US refuses Basel Convention, then the consequence is that US will not be allowed to do plastic waste trade with developing countries which are parties of Basel Convention, but not members of Organization for Economic Cooperation and Development. So, there will be loopholes, that is why don’t be weak and brave enough to reject. No more plastic waste smuggling,” he said.