DNA analysis can provide accurate data on quota settings of wildlife in Indonesia under the 1999 Government Regulation on Plants and Wildlife Use.

Noviar Andayani, country director of WCS Indonesia, said that the mission is to support Indonesian government to save wildlife, on lands and on waters.

One of the technologies recommended by WCS is through DNA analysis allowing the tracking of wildlife trade provide more evidence for illegal traders, especially beyond national borders.

“This DNA genetics analysis is not something new and we are not applying new [method]. The new thing is the orientation of DNA genetics not to be used for management and law enforcement but to protect critical endangered wildlife in its habitat and protect the habitat. That is the biggest task,” said Andayani in Depok on Wednesday (19/12/2018).

Furthermore, she said that the priorities for this DNA genetics analysis are Sumatran elephant, Sumatran tiger and Sumatran rhinoceros as the three animals are critically endangered due to hunting and conflict with humans.

“To develop this research, we were supported by Faculty of Mathematics and Science of University of Indonesia, which is known for its biodiversity researches,” she said.

Abdul Haris, dean of the faculty, said that tackling illegal wildlife trade in the country requires new approaches, including technology, for example DNA based wildlife forensics.

“We have sufficient research tools for this DNA genetics analysis. To identify or do DNA analysis can also be done by collecting samples of feces, blood, hair, dirt, urine, bone, feather, and saliva, along with other samples collected from confiscated items or from its habitat in the nature,” said Haris.

Muhammad Haryono, head of genetic resources at the Ministry of Environment and Forestry, said that government’s policy on genetic resources is being discussed through the revision of the 1992 Law on Animals, Fishes and Plants Quarantine.

“Current quarantine law has yet to cover wild plants and wildlife, let along genetics. In the revision, it will include on plants, wildlife and genetics, so the monitoring in the entrance or exit such as in the airports on illegal wildlife and genetic can be heightened,” said Haryono.

Furthermore, he said that DNA genetic analysis will help the government to conserve wildlife and law enforcement against illegal wildlife. In conclusion, the efforts for strong collaboration need to be developed to protect Indonesia’s biodiversity. 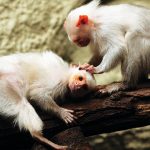