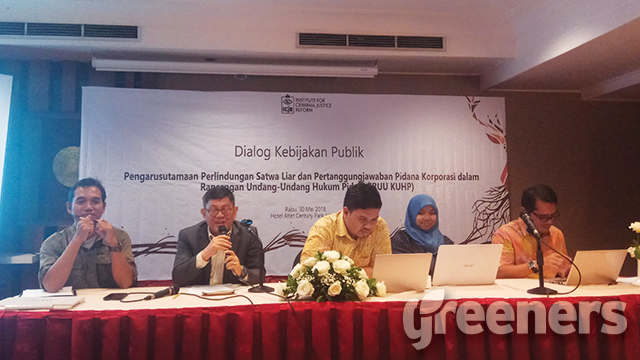 Erasmus Napitulu, program director of Institute for Criminal Justice Reform (ICJR), said to define demands from next generation related to environmental rights, such as protection on other species, is to be included in the environmental protection political space. It can be done by renewing the penal code.

The Penal Code is Dutch occupation’s legacy which becomes the backbone of Indonesia’s criminal code. Napitulu said the effort to renew the penal code by the government and DPR since 2015 is a momentum to place back the country’s criminal code foundation.

“The penal code changes brought four main missions, — decolonization, re-codification, democratization, and national law harmonization. Based on the National Alliance of Penal Code Reform, the four missions have yet to be discuss by the government and DPR in the draft,” he said.

Taufiqulhadi, member of the penal code draft working committee of commission III said the 1990 law on natural resources conservation and its ecosystem had been excluded before Reform Era. Nevertheless, Taufiqulhadi said the law is entirely designed due to international reaction over recent massive illegal wildlife killing and hunting.

“At the time, the capital, in this case the corporate and economics, is everything. So, even though there is the law but [the law] is still dull. Lots of people criticized the law [with] maximum five years in prison and 200 millions of fine meanwhile the damages can reach up to billions of rupiah. So, it was not worth it. Hence, that’s what we want to fix in this penal code,” said Taufiqulhadi.

Furthermore, he said that illegal wildlife crimes fall to third rank as the most crime in the country, just after narcotics and human trafficking. Based on Center for Financial Transaction Report and Analysis, the value of illegal wildlife amounts to Rp13 trillion (US$930) per year.

“From existing regulation in the penal code then the core crime of wildlife trading which are to capture, harm, kill, restore, own, domesticate, transport and trade protected wildlife, dead or alive, have not been regulated. Currently, the penal code is being processed in DPR,” he said.

Furthermore, he said that illegal wildlife crime more often than not being committed by corporation aiming for large benefits out of Indonesia’s resources. Hence, the penal code should also include corporate responsibility towards environment.

“Previously, there was not discussion about corporation but currently [corporate] is damaging environment and committing crime against wildlife will be charged. The law will be regulated under the Penal Code,” he said adding that general requirements about corporation are included in clause 52 to 57.