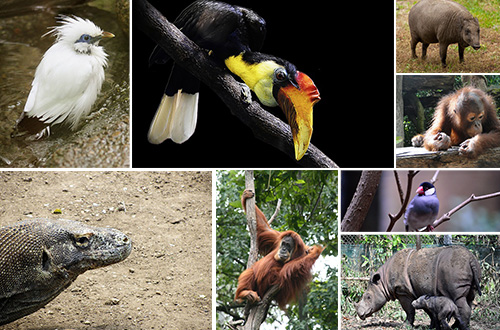 Jakarta (Greeners) – The key to protect the ecosystem was through preserve outside the ecosystem, said Minister of Environment and Forestry, in Jakarta, on Wednesday (14/12).

“Up to date, 25 out of 42 species in the country are in the brink of extinction. These species were chosen to determine the successful of ecosystem protection. Every species represents the characteristics of each region and ecosystem of Indonesia,” said Minister Siti.

Furthermore, she said that the ministry had been managing nature based tourism, protecting the environment and forestry which also supported tourism ministry.

“For example, by protecting komodo dragon and maintain its landscape and invite more tourists [to visit]. This effort had attracted 4,03 million domestic tourists and 0,21 million international tourists to Komodo island,” she added.

In a previous interview, Director General of Natural Resources Conservation and Ecosystem at the ministry, Tachrir Fathoni, said that the biggest challenge in protecting animals and plants must be based on smart strategy and coordination with local people.

Fathoni, who is now retired from his position, said that there were non-governmental organizations that would care with environment and nature. The donors and managers of conservation areas, he added, will be given special facilities, such as land tax amnesty. Though, he said that everything was still under discussion.

“Involvement from all parties, including local people, is crucial, for example in protecting our elephant,” he said. “Elephant population is declining, from 4,300 individuals in 2007 to 1,704 individuals in 2014.”

Director General of Environmental Law Enforcement, Rasio Ridho Sani, said that illegal wildlife trading has been named as transnational crime and placed the third biggest trafficking, after drugs and firearms.

“Based on TRAFFIC Illegal Wildlife Network data, the revenue has reached up to 332 billion dollar in 2009 alone,” said Sani.

13 Jul 2016
Minister of Environment and Forestry: Indonesia Readies for Forest and Land Fires
News In EnglishMore News in English