Jakarta (Greeners) – Mount Rinjani National Park senior official said they have yet to receive any reports on cable car development on its site and only being notified through news. Agus Budi Santosa, head of national park, said that the development would be allowed only as far as outside the protected areas.

“From the news I read, the location would be at former coffee plantation far away from national park. But, if there’s a question on whether cable car or hotel or touristic site [built] inside national park, [the answer is] allowed but only certain places, such as in use zone. It would, of course, require a permit called as business permit for touristic facility procurement,” said Santosa in Jakarta, on Saturday (15/7).

In principal, he said, facilities development inside national parks was possible as long as in accordance with the zone and regulations.

He cited hotel development in West Bali National Park. All of the permits, he added, have already stipulated on Minister Environment and Forestry’s regulation on business permit for natural touristic site procurement.

“So, it’s allowed as long as it follows regulation and cable car would not be entered national park,” he said. “It’s still in Rinjani but not on its national park.”

The cable car development plan had met with controversy among public. On current development, feasibility study had been finalized with investors are pushing for completion on necessary permits, including Business Permit on Land Tenure. 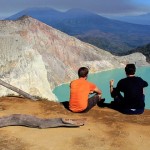