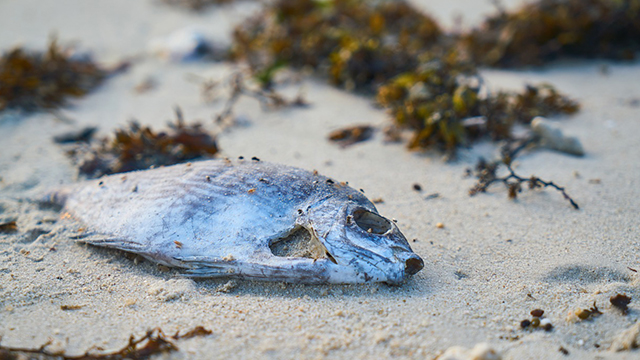 Blooming algae, translated from Harmful Algae Bloom, is damages cause by microalgae (phytoplankton/diniflagelata) resulted to fish deaths, poisonous clams, and other impacts in coastal areas.

Eutrophication has enabled microalgae to bloom. If a plant, in this case microalgae-phytoplankton, was given high dose of nutrients then its population will bloom. The toxic of the nutrient comes from natural process of the water, such industries, detergent, agriculture, human excrement, and farming.

Nevertheless, strong evidence suggests that eutrophication in coastal areas around the world due to human activities increases the releases of high nutrients (nutrient and phosphate) to marine ecosystem making the nature loses its adaptation ability (Coelho et al., 2004). 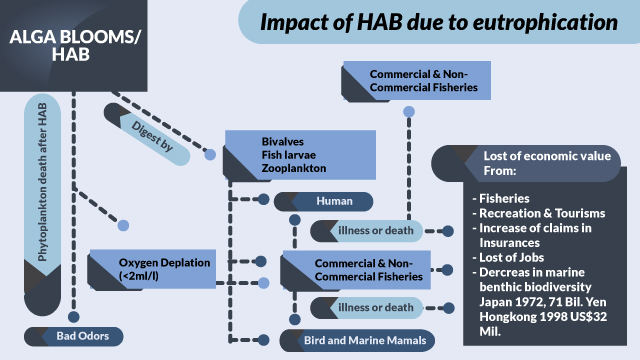 Impact of HAB due to eutrophication. Source: Wouthuyzen (2007)

Second, he added, dangerous for public health as it could lead to deaths, especially areas dominated by Paralytic Shellfish Poison, a toxic accumulation on marine animals and plants, including shellfish, fishes, crabs, shrimps, and other organisms consume by human, marine mammals and seagulls.

Third impact is mass fish deaths and decreasing biodiversity due to low oxygen level (<2ml/l) at the bottom of the water or hypoxic. Last but not least, loss of livelihood for fishermen, either for catch or farming as people are afraid to consume seafood as resulted of blooming algae.

From all of the impacts mentioned, massive fish deaths is the most reported and economically affecting the fisheries sector. Muccus of algae covered fish gills leading to their deaths. Wild and farm fishes have all affected by this blooming algae. Though the mechanics of fish deaths have yet to be understood, but the reality showed that muccus production can produce deadly poisons for fishes.

Wouthuyzen summarizes several studies regarding impacts of blooming algae due to eutrophication, such as Hongkong in 1998 and Peru in 2006, the worst incidents of blooming algae which had destroyed thousands of tons of fishes and suffered millions of hundreds of dollars.

Karl Havens, professor of University of Florida, said that there was indication that eutrophication would be worsen if climate change causing the temperature in lakes or estuaries was getting higher as predicted in many areas in the world.

It is a timebomb. Nontji regrets lack of serious and continued researches on eutrophication in Indonesia. Furthermore, Nontji also said more concerns on the issue and comprehensive policy to tackle the issues as it related to economy, social, health and environment.

Considering Jakarta Bay’s important role, the seriousness to long term monitoring on its quality is inevitable and urgent. (*)