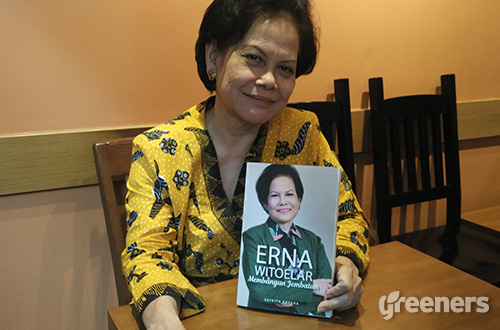 Jakarta (Greeners) – Environment issues cannot be seen from one side. Social problems such as poverty, legal issues, and culture must be integrated into one unity if the aim is to tackle environment issues in Indonesia.

Andi Erna Anastasjia Walinono or known as Erna Witoelar, who was Minister of Housing and Regional Development served under Abdurrahman Wahid’s National Unity Cabinet, said that none of those issues were new.

Though all of the contexts have been included in Sustainable Development Goals (SDGs) which translated into Indonesia’s National Mid Term Development Planning (RPJMN), either at central and regional levels, she said, that Indonesia still needed human resources support to accelerate SDGs and RPJMN achievements.

“Environment in Indonesia, we can surely say, in the state of emergency. So, it has become not only government’s works but also all stakeholders in broader meaning,” she added at her book launch, “Erna Witoelar Membangun Jembatan” in Jakarta, on Monday (6/2).

Human resources, she said, was not an easy task especially during her time as a minister. She said that it was hard to look for qualified human resources with interest in environment issues. Furthermore, she said that not all understood that the issue cannot be solved on its own and must use holistic approach.

“To find that resource, you can say it’s very rare. That is why, this has become an on-going home work to be able to encourage the spirit and hard work to raise the environment issue and social awareness in Indonesia,” she said.

The book, “Erna Witolear Membangun Jembatan”, launched on February 10, was written by Safrita Aryana, author of DR. HC. Martha Tilaar and Urban Transport. The 259 pages book is a biography of Erna Witoelar in speaking her minds and things she had achieved as an environment activist and practitioner.

She had hoped that young generation, especially women, can use the book as source of inspiration as the nation’s future lies on sensitive, care, and eager to learn young generation.