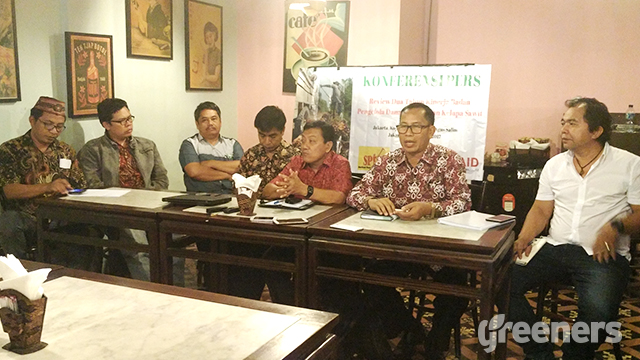 Jakarta (Greeners) – As oil palm transform into strategic commodity in Indonesia’s economics, its management still presented a list of problems, starting from weak permit mechanism, monitoring and controlling lead to the sector prone to corruption, said a law expert in Jakarta, on Thursday (15/6).

Hifdzil Alim, a law expert, said that Anti Corruption Commission (KPK)’s review on oil palm industry back in 2016 revealed there was no integrated management on oil palm plantation and industry.

The current situation, Alim added, did not meet sustainable development requirements which only lead to corruption in the sector.

From upstream, he said control system in permit issuance has yet to be accountable to ensure business’ compliance. It is shown, at least, from the absence of spatial planning based permit management. In addition, there is no one map policy scheme in issuing permits.

“Meanwhile, downstream, export’s charges control is not effective as there’s no verification system. The use for oil palm fund from Oil Palm Plantation Management Board runs out only for biodiesel subsidy,” he added.

Meanwhile, the Board since established in 2015 was tasked to manage oil palm plantation and use the funds for replanting, human resources capacity building, advocacy and research, research and development of plantation, promotion, plantation rejuvenation, and develops facilities for plantation.

“However, in practice, majority of the fund is used only for biodiesel subsidy,” he said.

Oil Palm Farmers Union Coordinator, Mansuetus Darto, said that the Board contribution to research and development, especially capacity building for oil palm farmers, have been lacking compare to subsidy for biofuels or biodiesel.

The Board, said Darto, had spent Rp 10.6 trillion for biodiesel subsidy in 2016, or equals to 91 percent of total budget collected in the same year. Meanwhile, government regulation stated that subsidy was not main task and aim of the Oil Palm Board.

He said that 2014 Government Regulation stipulated percentage for renewable energy in national energy mix for 23 percent by 2025 and 31 percent by 2050. However, it does not mean that all funding for subsidy comes from the Oil Palm Board.

Furthermore, he said that the Board should return to its task to develop sustainable oil palm with planning and fund allocation monitoring through intermediary institution or involving association/union, central/local government, academician and NGOs.

“Next step, oil palm fund must be audited every year by public accountant and reported to public through mass media. The cooperation between The Oil Palm Board and KPK also needs to be implemented to prevent corruption on oil palm fund and better management of plantation and oil palm industry,” he said.