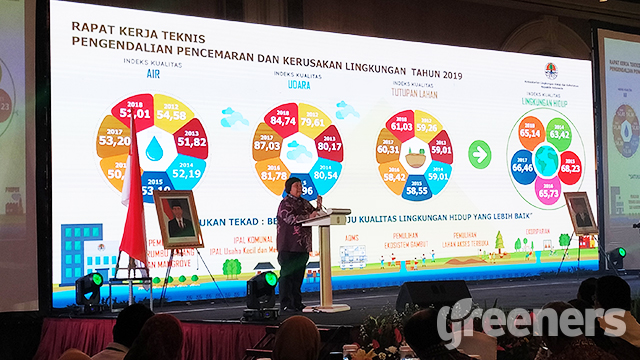 Jakarta (Greeners) – Ministry of Environment and Forestry aims to increase Environmental Quality Index for the next five years, focusing on water, air and lands or forests, said Minister Siti Nurbaya, in Jakarta, Wednesday (27/02/2019).

Indonesia’s Environmental Quality Index from 2015 to 2018 has shown stability, though water quality needs to be improved.

The index, Minister Siti added, is able to depict yearly status, however, it does not reflect current environment issues in general, which is the task of her office to deal with.

“I think it is time to develop this index by including index which could measure environmental issues, develop components such as Ocean Water Quality Index and index which measure the capacity to respond pressures and current environmental conditions,” she said.

She said main priority in sustainable development is to improve and to strengthen social norms. In addition, the development must be based on supporting and carrying capacities, eco-region based development, prioritizing open areas, reserving and preserving areas with high value ecosystem, among others.

In 2015, the ministry included the index as one of the government’s performance measurement.

He said that the ministry will try to measure sea water quality and develop forest degradation index for peatlands.

On water quality, Karliansyah said that it is relatively good, with six provinces made improvements, — Riau, Lampung, DKI Jakarta, East Java, Banten and South Kalimantan –. Nevertheless, there are provinces need to be improved, including several areas in DKI Jakarta, West Java and Central Java.

For city scale. air quality in Pontianak is still on dangerous level because of the 2018 forest and land fires. This condition also occurs in Jambi, Palembang, Palangkaraya, and Padang.

“To improve [air quality], we are stipulating automotive industry to use Euro 4 fuel, then strengthened emission testings, in addition, we also installed 49 air quality monitoring throughout Indonesia. The rest is regional government’s support to develop city forests and encourage people for mass transportation,” he said.

Furthermore, he said that river and lake, nationally, are in declining state. At least 16 provinces experiencing declining state of river quality index, nevertheless, there are improvements in Aceh, Jambi, Central Java, DI Yogyakarta, and Maluku.

“The hardest part is increasing water quality index because our rivers are heavily polluted from domestic waste, containing high level of E.Coli. The best solution is to regulate industries through PROPER, as currently, 87 percent of the industry have complied, and [the method] adopted the water quality index developed by US EPA,” said Karliansyah.