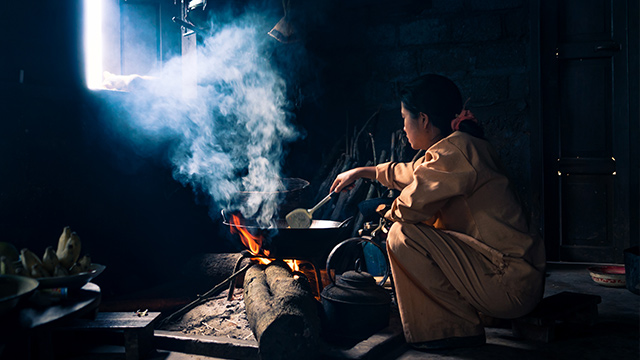 Jakarta (Greeners) – Women and girls have high health risk due to solid fuel use in the kitchen, such as woods, coal, animal dung, among others.

Head of Indonesian Consumers Foundation, Tulus Abadi, said that 43 percent of households in the country used solid fuel, especially woods. In the future, he added, villagers will continue to use traditional biomass, such as woods, coal, animal dung and others.

“Meanwhile, wood is solid fuel that would jeopardize health and environment for emitting 88 ppm carbon during cooking and 4 ppm without cooking,” he said in Jakarta, on Monday(10/4).

“Government must be careful on its plan to revoke subsidy for gas early 2018 because it might encourage people, especially low income families, to go back to use chopped woods again due to high price. This can be dangerous from health, environment, and also consumption ability,” he said. “If they pulled the subsidy, one gas can reaches Rp45,000 which can hit hard for people and their consumption scheme.”

Furthermore, he said that government need to facilitate people to use clean, affordable and healthy energy, either in major scale such as geothermal, solar panel, or other sources of energy.

People can also use local sources, such as domestic waste to produce biogas. These efforts need to be facilitated by government, including local government with clear regulation and financial schemes.

“Without clean energy use and development for households then health risk for women and children will increase in addition with high price of gas, people will definitely turn to corrosive energy that would threaten health and environment,” he said.

World Health Organization in 2012, 4.3 million died prematurely due to household air pollution cause by solid waste. Indonesia is predicted to experience 45,000 deaths of women and children from the use of solid fuel.