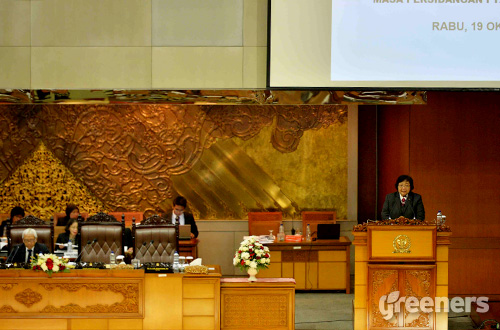 Gus Irawan Pasaribu, Chair of Commission VII, which oversees environment, said members of Commission have met in the first stage discussion on Oct 11 and agreed to ratify the international agreement which aimed to prevent two degrees Celsius temperature rise.

“DPR will be having further discussions with related parties [on the ratification],” said Pasaribu in Jakarta.

Minister of Environment and Forestry Siti Nurbaya appreciated and thankful for the ratification adding that she no longer worry for Indonesia had received international supports.

“I am not worried about the implementation [because] of positive international support. I do sincerely feel that the international supports us,” she said. “However, the most important thing is Indonesia’s own work and its public to change its attitude. This is where socialization needs to be done.”

Indonesia, listed as the 85th country to ratify the agreement, will receive advantages as a nation prone to climate change impacts, geographically, she added. Indonesia is predicted to experience temperature rising between 0,5-3,92 °C by 2100.

In addition, Indonesia has experienced the shift between wet and dry season, significantly. Rainfall intensity is higher and its duration is shorter hit northern part of Sumatera and Kalimantan.

Indonesia joined the other 84 nations which have legally binding the agreement to keep earth’s temperature based on common but differentiated responsibilities and respective capabilities, and push for developed countries to provide funding, capacity building and transfer technology for developing nations.

“Indonesia can learn valuable lessons including increase protection to prone areas from negative impacts of climate change so efforts to control it become a priority,” she said adding that national commitment to achieve sustainable development, low carbon emission from different sectors, and better sustainable forest management.