The decrease is caused by several factors with the biggest threat is human behavior followed by predators, including pigs, lizards, eagles, sharks and environment such as as high temperature of the sand and high tide.

Fishing also poses threats on turtles such as swallow fish baits and stuck in the net. Other facts proved that plastic waste also caused deaths.

From our research, we found heavy metal on green sea turtle and hawksbill turtle’s eggs have reached above safe level for human consumption,” he said. “There are at least eight dangerous substance in those eggs, including mercury, cadmium, Arsenic, tin, zinc, manganese, iron and copper.”

For Kaimana, he added, surveys were conducted using interview method to local people and fishermen in Etna Bay, Lakahia and Ombanariki.

The survey was conducted on March to October 2016 which also declared six out of seven turtles in the world are in Indonesia with four of them found in West Papua, — green sea turtle, hawksbill turtle, olive ridley sea turtle, and leatherback turtle — which swim across Aru, Kei, Kaimana and Fakfak.

“Turtles come to release their eggs in sandy beaches is an indicator for good or poor health of the environment. Only non polluted beaches and water areas with good ecosystem are visited by turtles,” said Nikijuluw. 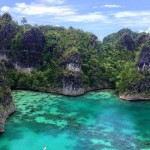