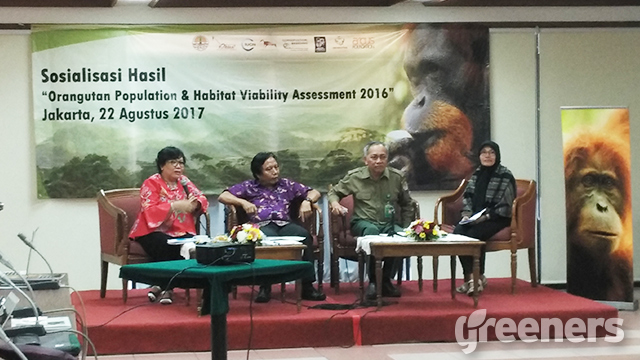 Jakarta (Greeners) – At least 71,820 orangutans left in the islands of Sumatra and Borneo (of which comprises of Kalimantan, Sabah and Serawak in a total of 17,460,600 hectares, based on a recent Population and Habitat Viability Analysis Orangutan 2016 or PHVA, released in Jakarta on Tuesday (22/8).

The numbers were spread to 52 meta-population and only 38 percent is predicted to be viable within the next 100-500 years.

Head of the PHVA team and researcher of Indonesian Orangutan Forum, Suci Utami Atmoko, said that research conducted on Sumatran orangutan (Pongo abelii) population and distribution research in 2004, the numbers were growing and more detailed. From the predicted 6,667 orangutans in a total of 703,100 hectares with altitude below 800 meters above sea level, current population is predicted for 14,470 orangutans in 2,155,692 hectares.

Currently, Sumatran orangutan population can be found in a habitat up to 1,500 meters above sea level altitude spread in 10 meta-population and only two population will be sustainable in the next 100-500 years, Jantho Southeast Aceh and Bukit Tigapuluh in Jambi.

“Nevertheless, the facts do not indicate any increase on population. Because, from the population density, it is declining from 0.95 to 0.67 orangutans/square kilometers,” said Atmoko.

Though growing in more extended and detailed areas, but not in terms of population estimation.

Currently, Bornean orangutan (Pongo pygmaeus) is predicted to have 57,350 orangutans in a habitat covers 16,013,600 hectares spread out in 42 population bags, with 18 of the total population will be sustainable in the next 100-500 years.

Hence, it would need cooperation in orangutan conservation and its habitat between Indonesia and Malaysia to protect the population and connected habitat.

Director general of Natural Resources Conservation and Ecosystem, Ministry of Environment and Forestry, Wiratno, said that the result of PHVA will be turned into main guidance in the making of 2017-2027 Orangutan Conservation Strategy and Action Plan to replace the 2007-2017 document which will end this December.

“With better and completed data, the planning will come up with real, measured, and applicable strategy,” said Sugardjito. 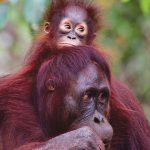