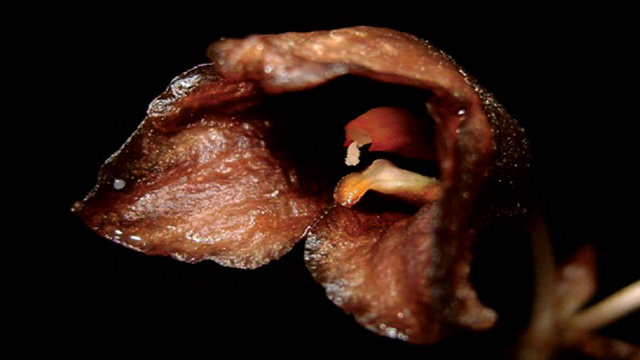 Jakarta (Greeners) – Indonesian scientists published a finding of a new species of holomikotropic orchid group, or ghost orchid, in the international scientific journal, Phtotaxa, and called it as Gastrodia Bambu, said one of its scientists, in Jakarta, on Monday (4/9).

“The new species comes from Java island and had already been published on mid-August 2017,” said Destario Metusala of Purwodadi Botanical Garden, in a statement to Greeners.

Metusala, who is also a researcher at Indonesian Institute for Sciences, collaborated with conservation biologist from University of Indonesia, Jatna Supriatna, found and published the new species.

The new species research, Metusala added, was in line with research priority of Purwodadi Botanical Garden of Indonesian Institute for Sciences, and Indigenous Studies of University of Indonesia to support researches and conservation efforts, especially species endemic to Indonesia. Hence, the collaboration and research synergy between two institutions can be improved in the future.

The statement explained Gastrodia Bambu requires specific ecological condition as the plant is sensitive to environmental changes, including to dry season, light intensity, and the changes on its growing medium.

“The orchid loves dark, moist habitat, and always clinging to lush old bamboo clumps. It is why the species has the ghostlike impression,” he said.

Gastrodia Bambu has a bell shape flower with the size of 1.7 to 2 cm long and 1.4 – 1.6 cm wide. It is dominated with dark brown with the flower tips shape of long purplish spear.

On one inflorescence, it can produce to eight blooming flowers. It gives out rotten fish smell to invite insects for pollination. The inflorescence grows from soils saturated under old bamboo clumps at the altitude of 800 to 900 meters above sea level. 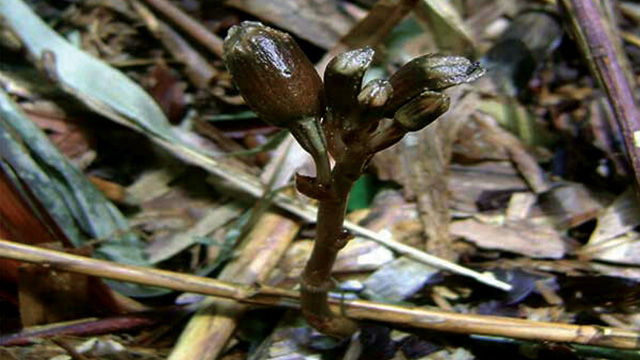 The ghost orchid group is the plant without chlorophyll so no photosynthetic process, but not parasitic. Hence, all its life-cycle depends on organic nutrition supply from mycorrhiza mushroom.

The species only turns out on a short period of 2-4 weeks in a year. It grows suddenly in saturated lands, then a week or two, it will decay and dead. The color of Gastrodia genus has never been too bright, mostly white, yellow, to brown.

One of the disturbance of its habitat is land opening on bamboo clumps. If the bamboo trees are being cut down, it will impact on moisture, light intensity and biological trait of its growing medium, which will disrupt the population.

Climate change can change the annual rainfall intensity, it is predicted to influence its blooming periode and the population growth of the orchid.

Unlike common orchid, up to date,Gastrodia Bambu species and most of holomikotropic orchid group have yet to be cultivated or planted outside its natural habitat.

It remains a mystery as it poses a main challenge for its conservation efforts. Research on the species ability to adapt to climate change is still undergoing through anatomy and physiology analyses.

The name origin of Gastrodia Bambu is from its specific habitat, the bamboo clumps, which also means Bambu in Indonesian language. The species is endemic to Java island, especially West Java and Yogyakarta. Its population is limited and facing pressure from land degradation.