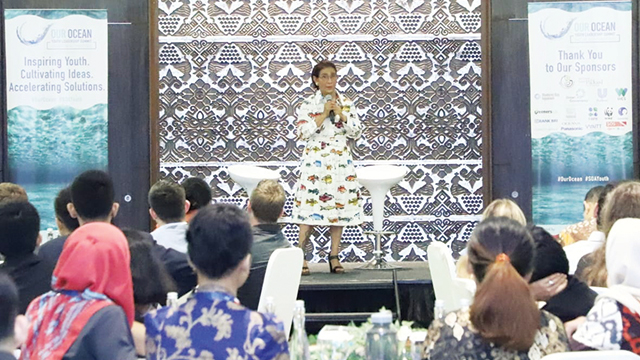 Nusa Dua (Greeners) – Minister of Maritime Affairs and Fisheries, Susi Pudjiastuti, praised the 2018 Our Ocean Youth Leadership Summit, in conjunction with the 2018 Our Ocean Conference, in Bali, stating that youth has important roles to protect and develop oceans.

“I am happy that oceans in Indonesia are progressing and have become world’s attention. I have a dream of oceans rights to protect the oceans. Hence, we need to have strong energy to realize that dream,” said Minister Susi, in Nusa Dua, Bali, on Monday (29/10/2018).

On her speech, Minister Susi said that illegal, unreported and unregulated fishing (IUU fishing) is an issue in Indonesia. It is detrimental to fishermen and people living in coastal areas. Furthermore, plastic pollution also poses threats to oceans, in Indonesia and the world. Hence, Indonesia needs to contribute and commit in reducing marine plastic waste.

“We need to get moving. There is no time. We need ocean more than ocean needs us,” she added.

Meanwhile, President of the General Assembly of the United Nations, Peter Thomson, said that marine destruction due to not environmentally friendly human activities.

“Massive world’s mangroves are depleting because of impacts of climate change, all because of human activities. Not environmentally friendly human activities resulted to damages on oceans and direct impacts on marine ecosystem. Illegal fishing and marine pollution are also damaging to oceans,” said Thomson.

Furthermore, he said that despite of world’s marine oceans are caused by human activities, humans also work to save oceans.

Oceans protection is officially included in the Goal 14 of Sustainable Development Goals or SDGs, which protects and preserves seas, oceans and marine resources for sustainable development.

Nevertheless, he said that all stakeholders must resume responsibilities to protect oceans.

“All parties need to be aware and act to preserve oceans, for the sake of our grand children in the future. We need to think in every air we breathe, if not us, then who will protect our oceans,” he said. 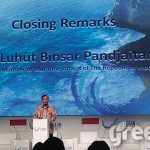