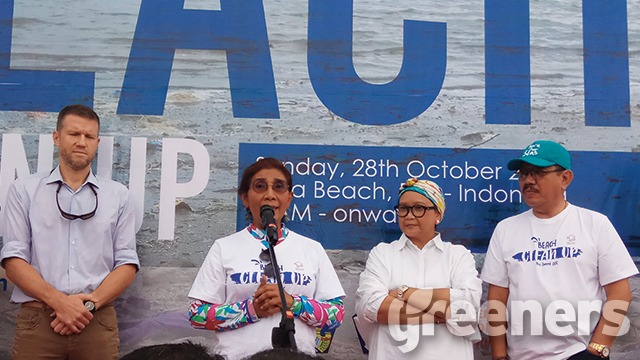 “I hope it becomes a habit in all places, a habit in our own places, not just government program because this awareness is what makes us to live a healthy life. Keeping clean in Bali is important because Bali is a tourist destination. Bali’s economic revenue comes from tourism, so cleanliness is important,” said Minister Susi at Beach Clean Up Day in Kuta Beach, Bali, on Sunday (28/10/2018).

Minister Susi said the Youth Pledge Day is a reminder to all Indonesians of unity, one nation, one language, and one goal to achieve maritime goals and transform Indonesia to be the world’s maritime axis and oceans as nation’s future.

“We hope that language unity, Indonesians can bond stronger. Today, we look at the sea and face the sea based on government’s mission to make ocean as the nation’s future. Our ocean, our future, that is mission of our government. Today, we face our problems, waste [issue], ocean pollution because we want to make oceans as our nation’s legacy,” said Susi.

In addition, she said that Indonesia is the largest contributor of marine waste, second after China and if people do not reduce plastic waste, fishermen will only get plastics as their catch by 2030.

“We have protected our oceans from illegal, unreported, and unregulated fishing, and now we protect [the oceans] from pollution created by all of use,” she said. “Hence, I encourage for people here and Indonesians to stop using plastic in our daily lives. We hope that cleaning up the beaches from plastic waste will be reduced [in the future],” she said.

Furthermore, she appreciates Balinese government’s effort to stop plastic use by 2019, which is a big step to reduce plastic waste in Indonesia.

“I no longer want to watch videos of plastic waste in Bali so that tourists will know this region as a clean from plastic area,” she said.

Meanwhile, Foreign Minister Retno Marsudi, said that protecting oceans from waste is crucial for next generation.

“Oceans are not huge trash bins. Oceans are our life. Our ocean is our life, so love oceans as we love our own life. Today, we celebrate Youth Pledge, Indonesia is reborn because of the spirit of unity and cooperation in Our Ocean Conference, which will be held tomorrow,” said Minister Retno.

Indonesia will host the international meeting, the 2018 Our Ocean Conference, in Bali, 29-30 October, marking the fifth event since 2014 Conference in Washington DC, US. The conference, attended by stakeholders and marine experts, aim to discuss and seek solution on marine issues. The event will be attended by 1,500 participants from various countries, international organizations, civil society, private sector, public figures, and influencers from 143 countries.