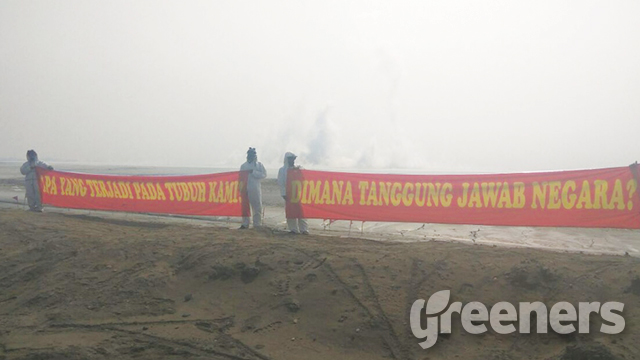 Sidoarjo (Greeners) – East Java chapter of Indonesian forum for the environment stated that soil and water surrounding hot mud contains polycyclic aromatic hydrocarbon (PAH) up to 2000 times above normal. In addition, heavy metal level also found in biota of Poring river which had been the site to dump hot mud.

“Based on the research in 2008, it can be concluded that soil and water surrounding hot mud contains polycyclic aromatic hydrocarbon up to 2000 times above normal. UN considered PAH as dangerous and carcinogenic organic substance,” said Rere Christanto, director of East Java chapter of Indonesian forum for the environment (Walhi), at the 12 Years Commemoration of Sidoarjo Mudflow on Tuesday (29/5).

Based on Walhi research in 2016, high level of heavy metal also can be found in biota of Porong river, which had been the dumpsite of the Lapindo mudflow. The research showed lead level up to 40 to 60 times above standards.

“The combination of heavy metal, gas and PAH in the areas surrounding mudflow showed strong level of contamination and allegedly can impact people’s health near the area. Heavy metal can influence their health through water, mud and air,” said Christanto.

Harwati, one of the villagers, said health impacts from the mudflow range from bad odor to respiratory problems.

“Though we have moved and lived in other villages, but we still get affected by the smells. Villagers got sore throats,” said Harwati hoping for the government to deal with health issues of mudflow affected villagers.

“Please help villagers of mudflow still haven’t received Kartu Indonesia Sehat (Indonesia’s health card) so that sick villagers affected by the mudflow don’t have to spend money to go to the hospital,” she added