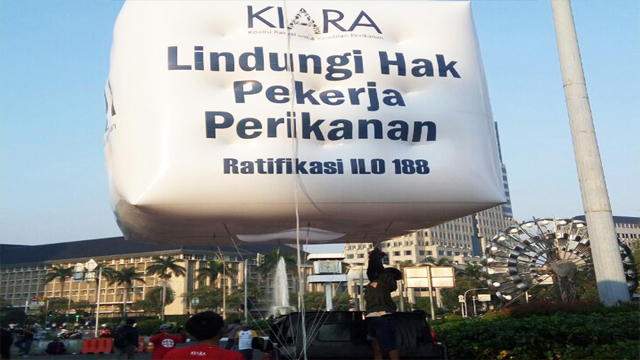 Jakarta (Greeners) – Dozens of workers in fisheries sector staged a peace rally on May Day demanding for the state to issue a law to protect and empower their profession.

Herawati demanded for President Joko ‘Jokowi’ Widodo to protect at least the rights of 12 million workers under the Constitution, which stipulates all citizens have the right to work and decent livelihood, to choose employment, and be free from fear to do or not do his/her work.

“Based on the Constitution, May Day should be the stepping stone for Jokowi-JK administration to pay attention to workers in fisheries sector. Numbers of workers in fisheries management and marketing are increasing every year. However, discrimination from the companies also still happening,” she said to Greeners.

Based on KIARA’s Data and Information Center in 2017, discrimination against workers or laborers in fisheries sector range includes heavy workload and long hours, more than ten hours, not allowed to complain, no complain mechanism is available, if the workers resist then they will be thrown to the sea, even if the workers consider breaching the contract then the families will be harassed.

Furthermore, International Labor Organization already defined working standards in capture fisheries in 2007 however not one nation in Asia ratified the ILO Convention No.188, including Indonesia.

Furthermore, she said that Minister of Marine and Fisheries Affairs Susi Pudjiastuti had issued a ministerial regulation in 2015 on human rights certification on fisheries industry. However, up to date, law enforcement on human rights violation against fisheries workers is still low. In addition, lack of coordination between government agencies such as Ministry of Labor and Ministry of Transportation.

Based on the facts, KIARA demand for President Widodo to ratify ILO Convention No.188, to instruct minister of labor and minister of marine and fisheries affairs to stop industrial outsource practices and contracts which allows slavery, and to instruct Indonesian chief police to be strict on industries who violate labor law in Indonesia, such as banning worker’s union, failing to pay the salaries, providing salaries below regional standard, among others.