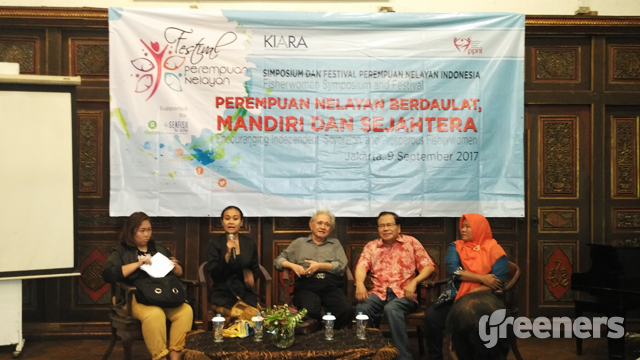 Jakarta (Greeners) – Despite of the country’s marine potential, Indonesia is still lacking behind to recognize its fisherwoman who serves as crucial actor to ensure economical fulfillment while the husbands went to the seas.

Based on Ministry Marine and Fisheries data in 2012, Indonesia has 2.2 millions of fishermen of which 95 percent of the number is traditional fishermen with less than 10 Gross Ton of boats.

On May 2014, People’s Coalition for Fisheries Justice or KIARA, recorded at least 56 million people involved in fishing industry, starting from catching, managing, to distributing. From the number, 70 percent or 39 millions are fisherwomen.

Unfortunately, fisherwoman or wife of fisherman have been neglected.

“Fisherwoman has been demanded to seek for debt money while her husband is at the sea but to get access for insurance is already difficult for them,” said Umi Naiyah, Presidium of Indonesian Fisherwoman Association, in Jakarta, on Saturday (9/9).

Fisherwoman in 300 districts/cities in Indonesia have contributed in fulfilling fish protein in the society. They, she said, contributed to fulfill the nation’s food security, ironically, their roles are challenged by deprivation of their living space.

Director General of Marine Spatial Planning, Ministry of Marine and Fisheries, Brahmantya Satyamurti Poerwadi, said that there was imbalance on the treatment for workers in fisheries. Hence, the ministry has been doing consultations and empowerment in regional levels. Poerwadi said that main factor for fishermen welfare lies on the role of women, considering the issues occurring in north and south beaches of Indonesia.

“In the south beach, fishermen docked their boats, fisherwomen gather all the catches, that’s the equality. Meanwhile, in the north part, those practices have yet to be called as normal. When the boat docked, fishermen did their own trade and manage the money,” he said.

Indonesian government is currently paying attention to women’s roles in every aspects of social life in relation to maritime activities as stipulated under the 2016 Law on Protection and Empowerment of Fishermen, Fish Farmers, and Salt Farmers, which ensure empowerment must also involved women’s roles in the households.

It underlines the state’s responsibility to increase the involvement and role of fisherwoman in every marine and fisheries industry, starting from the smallest scale, the household.

In addition, Ministry of Marine and Fisheries Issues also issued ministerial regulation on a guidance on gender responsive evaluation and monitoring.

“The bottom line, the ministry supports [fisherwoman] to increase their income. Economic empowerment will be given to women. And, if there’s the ministerial regulation so regional regulation should support this. We have pushed for insurance program as this is cross ministries,” he added.

Former Coordinating Minister for Maritime and Resources, Rizal Ramli said that women’s roles in fisheries or fisherwoman are important especially in the fish farming industry, coastal and sea fishermen.

The government, he added, must paid attention to the safety and welfare of fish farmers who were majority female by giving basic health and accident insurance.