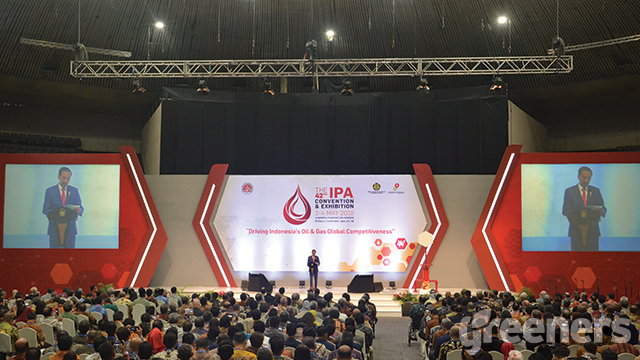 “Our regulation is not conducive, long-winded, too much procedures, complicated. I say that permits, procedures for our national oil and gas industry must be cut, must be simplified, no more complicated [process],” said President Widodo on the opening of the 42th Indonesian Petroleum Association (IPA), in Jakarta.

Furthermore, he said that he had instructed Minister of Energy and Mineral Resources Ignatius Jonan, last year, to cut bureaucracy in his ministry to facilitate oil and gas investment for Indonesia.

“[The ministry] had cut 186 complicated regulations, which stalling us from oil and gas investment. But, for upstream [industry], Ronald [President of IPA] said there were 14 regulations [have been cut off]. We are hoping to simplify and make it easy to attract more investment to Indonesia,” he said.

“Just talk bluntly, either to the minister or me. If [policies] still considered as complicated, which part? So that we can increase the production and people are interested to [invest] on the upstream [industry],” he said adding that the government will launch online single submission for the permits. “We are hoping that permits will be handled in one building, don’t need to go to other ministries, go back and forth, just in one building.”

Minister of Energy and Mineral Resources Ignatius Jonan said that oil and gas upstream industries are Indonesia’s economic growth contributor and the government is trying all efforts to speed up business process in the country by reducing numbers of permits and bureaucracy reform.

Meanwhile, head of Oil and Gas Special Working Task, Amien Sunaryadi said that communication and hard work are required from all stakeholders in the upstream industries to be able to raise competitiveness in Indonesia.

“We are sure that oil and gas industry will stay in Indonesia as global demands keep on increasing. [The] industry is facing challenge which force us all to be creative and innovative in efficiency and increase competitiveness,” said Sunaryadi.

13 Agu 2018
Scientists: Flores Back Arc Thrust, the Cause of Lombok Earthquakes
News In EnglishMore News in English