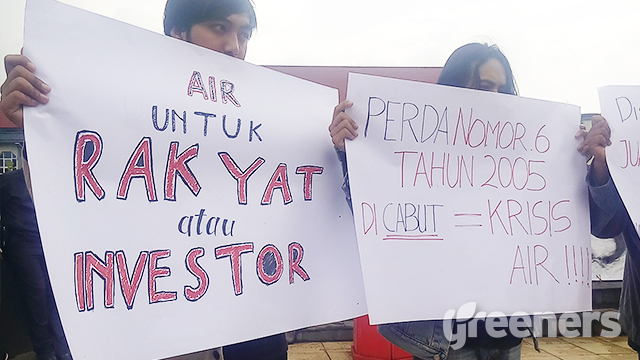 “East Java’s dependent on good quality of water is absolute,” said Rere Christanto, its executive director in a press release, on Thursday (22/3).

Walhi said the decreasing water quality was direct impact from environmental crisis, upstream and downstream. In upstream area, such as Malang Raya comprises of Malang district, Malang city and Batu city, have been critically degrading. The water supplies and demands in area showed critical condition.

Degrading water catchment areas including protected forest and areas due to forest use changes to settlements and tourism investment (for entertainment parks, hotels, villas, and others) are the major drivers for the damages in upstream areas.

Currently, 800,000 hectares of forest areas in East Java has been destroyed, — 250,638 hectares in Brantas Watershed, 286,102.12 hectares in Sampean Watershed, 270,296.79 ha in Bengawan Solo Watershed –, calling for integrated restoration effort for water quality in the province.

In downstream area, based on the region’s environmental agency site, there are 1,004 industries potential to polluting the whole province as 483 industries located in river banks of Brantas Watershed.

The numbers were far below factual number as the report only included pollution from 85 industries participating in the PROPER assessment. Latest report from Ministry of Environment and Forestry on Water Quality 2013 – 2015, showed that all rivers in East Java are categorized as Heavily Polluted.

The data on water quality of East Java should have been encouraging for candidates to prioritize water protection and restoration.

Pradipta Indra Arion, the protest’s spokesperson, said the plan involved additional land use changes of a total of 1,060.87 hectares for settlements, trade/service, office, industry and tourism, meanwhile areas allocated for food and horticulture are decreasing up to 1,682.64 hectares.

The action demanded for the government to open up public consultation on revised plan of the spatial planning.

14 Mei 2019
Ministry of Environment and Forestry: Endangered Species Populations in Indonesia are Increasing
News In EnglishMore News in English