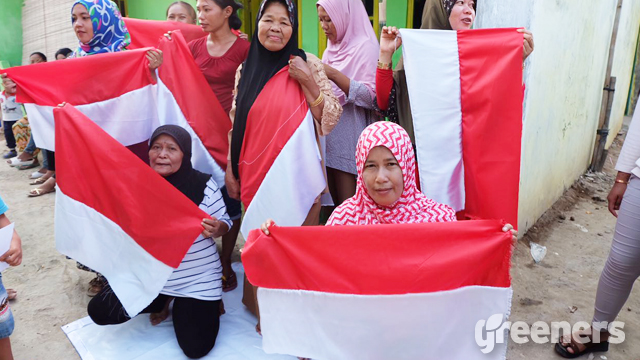 Jakarta (Greeners) – Dozens of fishermen’s children of Marunda Kepu and Muara Angke, north Jakarta, wrote down their wishes for Indonesia’s 72th Independence Day, one of them was for a better and sovereign Indonesia.

Secretary general of the People’s Coalition for Fisheries Justice (KIARA), Susan Herawati, said that the event was a reminder for Indonesian government on its plan for Jakarta Bay reclamation which would pose negative impacts for the children.

“Today, dozens of children of Jakarta Bay wrote down their wishes to the government. They wrote [hoping] for the country to sovereign on its own land, for coastal people to have clean and healthy seas, and for their parents to fish again the sea. Hopefully, the government would open its heart after learning the conditions of children in coastal areas of Jakarta Bay impacted by reclamation,” said Herawati in Jakarta on Thursday (17/8).

Based on Data and Information Center of KIARA, Jakarta’s coastal areas are inhabited by at least 3,790 households and 60,221 children below 17 years. Herawati reminds that these children have the same rights with all other children in the country.