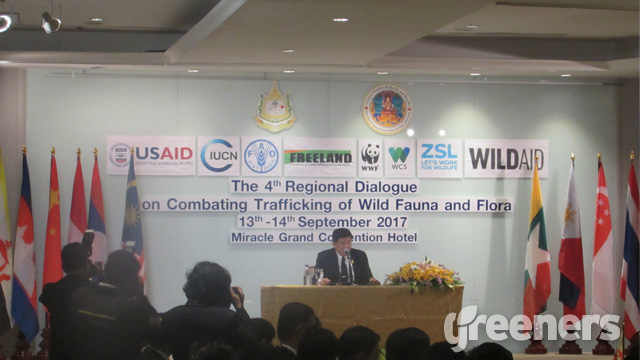 On his speech, General Surasak Kanchanarat underlined the importance to increase cooperation between nations in Asia region in tackling illegal wildlife trade which has been categorized as Transnational Organized Crime (TOC).

“Thailand has consistently increase our efforts and serious actions for this crime however it would not be sufficient without the spirit of strong cooperation among ASEAN nations. Despite of declining case of illegal wildlife trade, domestically, the international distribution shows high number. Only through the spirit of strong cooperation between ASEAN countries that we can effectively broke down this crime’s chain of distribution,” he said.

The fourth event is aiming on reporting the latest condition and strengthening the joint efforts in combating illegal animals and plants trade in Asia.

The result of the discussion is designed to support ASEAN countries action plan for Convention on International Trade in Endangered Species of Wild Fauna and Flora or CITES, an international agreement among countries based on World Conservation Union (IUCN) resolution.

Based on its country report, Indonesia under Ministry of Environment and Forestry has seriously taken actions through Multidoor Approach Law Enforcement. The approach is considered as tremendous breakthrough as suspects of illegal wildlife trade are liable for other criminal charges, including money laundering, corruption and tax.

“On challenges, that’s normal, there will be obstacles, it’s only a matter of seeing these criminals’ maneuver. For example, social media use and specific codes in their mode of operation,” he said.

The regional discussion is facilitated by Thai’s Ministry of Natural Resources and Environment with the support from USAID WILDLIFE ASIA, and IUCN. Other issues will be brought up at the discussions are current development on illegal trade cases on pangolin, tiger, rhinoceros, elephant, and Siameese Rosewood.