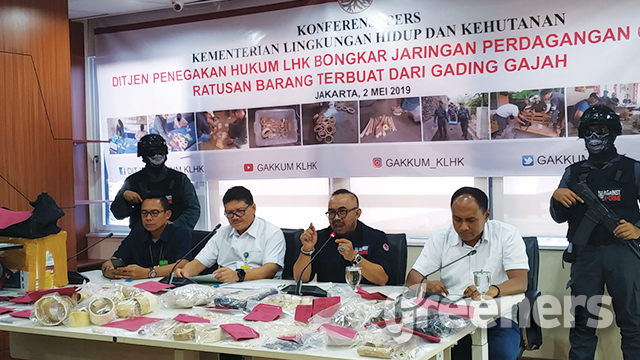 The foil of illegal wildlife trade put threats on elephants in Indonesia, which is currently only 2,000 individuals left.

Sustyo Irianto, director of forestry prevention and protection, said that based on preliminary analysis, the loss caused by illegal elephant ivory trade in Pati district reached to Rp420 billion (US$29 million). Evidence confiscated from the case is 200 ivory made items, such as cigarette pipes, rings, bracelets, and necklaces.

“Today’s fierce technology in the 4.0 industrial era, our challenge is with telematics crimes, including illegal wildlife trade, illegal logging or other crimes. With the center of intelligence and our cyber patrol, we are ready to monitor crimes,” said Irianto in Jakarta on Thursday (02/05/2019).

Furthermore, he said that recent elephant deaths in Indonesia also happened in other locations, such as Aceh, Riau, Bengkulu and Lampung, which possible to increase if illegal elephant ivory trade is not considered as serious crimes by all law enforcement.

“I regret that in this case, the consumers are middle-upper class people. It is not just about the money, but with this case, it means elephant population is under threats because elephant is one of ecosystem know in the forest need to be protected,” he said.

To identify the origin of the ivory, it requires lab tests. However, from the structures of confiscated items, Irianto said that the ivory come from Indonesia.

The raid is the follow up of Ministry of Environment and Forestry’s Cyber Patrol Team of Directorate General of Law Enforcement.

The team found three Facebook accounts, — chanif mangkubumi, onny pati and wong brahma –, actively trade via only parts of protected species to be distributed in Indonesia.

Yusiandi Susmana, head of Pati police, said that the police arrested the suspects and confiscated evidence on 28 April 2019. They found products made of elephant ivory in different shapes and sizes and sold via online.

“As partners of civil servant investigators, we coordinate and monitor, also assist and arrests to the three locations, and we did case reconstruction,” said Susmana.

For this case, Ministry of Environment and Forestry is working with Pati District Police which resulted to three men arrested, — OF (38 years), CK (44 years), and MHF (31 years) –, in Pati district of Central Java province.

The perpetrators of illegal ivory trade will be liable for five years in prison and Rp100 million (US$6,995) of fine at maximum as stipulates by the 1990 Law on Conservation.