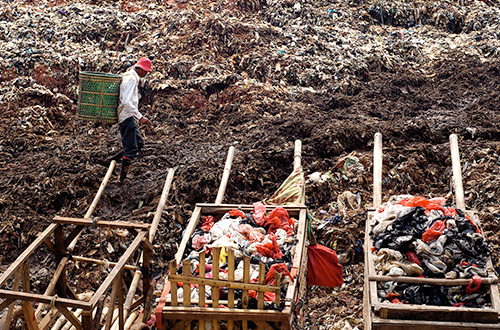 Jakarta (Greeners) – Ministry of Environment and Forestry said that incinerator for waste management was needed in major cities such as Jakarta with big volume of waste.

For Jakarta alone, 50 percent of domestic waste end up in landfills resulted to mounting of waste at Bantar Gebang landfill collapsed.

Director General of Waste, Toxic and Dangerous Waste Management, Ministry of Environment and Forestry, Tuti Hendrawatui Mintarsih, said that massive volume of waste in Jakarta would not be able to tackled if not using high-end technology.

“If the budget is enough, big cities such as DKI Jakarta still need incinerator to manage its waste because it can not longer depend on landfills anymore,” said Mintarsih, in Jakarta, on Friday (3/2).

Meanwhile, for smaller cities, Mintarsih said other options were available, such as gasification and pyrolysis, which were more environmentally friendly and no emitting.

“There are other options, such as with pyrolysis that could turned plastic into fuels,” she said.

Director of Waste Management, Ministry of Environment and Forestry, R Sudirman, said that despite presidential regulation on Waste Based Power Plants Acceleration has been cancelled by the Supreme Court, incinerator development must still going on especially for big metropolitan cities considering people’s population increase meant increase of waste volume in landfills.

“For example, Surabaya has reduced to 37 percent meanwhile 63 percent goes to landfills. It will take a long process to reach landfills and it will just piled up there,” he said.

Ministry of Environment and Forestry suggested to burn waste using incinerator based on standards stipulated by Ministerial Regulation issued in 2016 on Business Emission Standards and/or Waste Management Activities by Thermal.

Only waste residue that will reach the landfills.

“For small cities, incinerator is not allowed but should applied 3Rs, — Reuse, Reduce and Recycle –, stipulated by Waste Management Law,” he added.

Isnawa Adji, head of sanitary agency, said that incinerator for waste management in huge volume was needed. Citing Tokyo, city of Japan, also used incinerators which proved to be known as a green city.

“So, presidential regulation should not be interpreted one fold. The point is how to manage the waste properly. Resulted pollutants can be seriously reduced and the electricity is the bonus. The most important thing is to manage the waste,” he said.