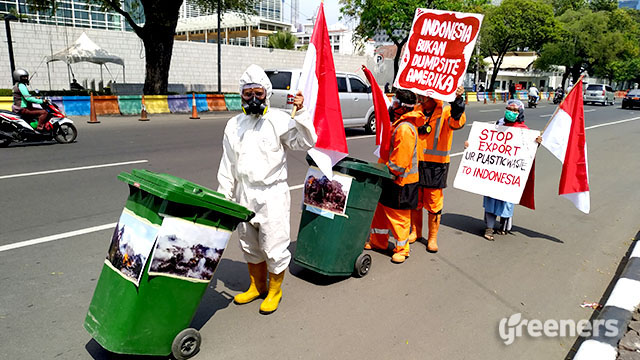 Jakarta (Greeners) – Indonesia’s activists staged a protest following the finding that the US dumped its domestic waste illegally to Indonesia since 2014. On June 14, Indonesian government re-export five containers of illegal waste belong to PT Adiprima Suraprinta to its origin state, the US. They deliberately mixed waste into papers imported for companies in Indonesia.

Head of Tanjung Perak harbor of Surabaya, states on Tuesday (9/07/2019), there were 38 containers from the US under inspection. Piled of waste consisted of baby diapers, food packaging, sachets, oil bottles, used clothes, e-waste, and other waste lead to environment problems in Mojokerto, Gresik, Sidoarjo and Surabaya.

Ecoton demanded for the US to get their wastes back from Indonesia and apologise for polluting the country.

“We want them to apologise to Indonesia, especially East Java people. How come a country that sent its own people to the moon could throw garbage to other countries. There’s a theory of don’t litter, that should be understood as a developed country,” said executive director of Ecoton, Prigi Arisandi, during the protest in front of the US Embassy in Jakarta on Friday (19/07/2019).

Based on Statistic Agency in 2019, the US is the largest importer of paper waste to Indonesia, especially East Java. There is a suspicion that the US sent waste papers contaminated with domestic wastes for a total of 25,000 tons per year and reached 150,000 tons per year in 2018. 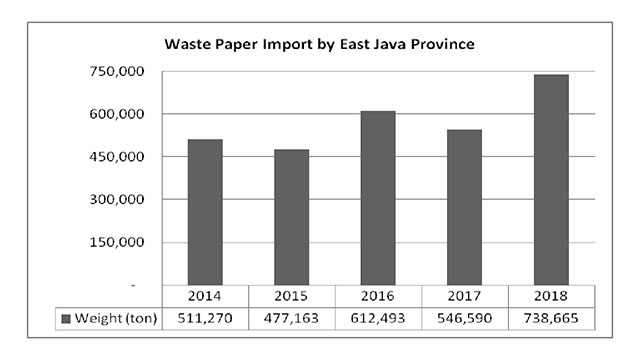 In East Java, there are 12 paper companies using paper waste materials from other countries. There are 43 exporters of paper waste, the top ten to East Java are the US, Italy, UK, Korea, Australia, Singapore, Greece, Spain, Netherland, and New Zealand.

The protest also included a letter from a high school student of East Java, Tara, for President Donald Trump, which she wrote that the US wastes have been polluting East Java.

“So, I wrote letter to President Donald Trump. The US is a developed country but sending their domestic waste to Indonesia and the amount is 150,000 tons per year. In the letter, I told them that the waste that they sent brought damages to Indonesia, and it polluting environment, water, air, and soil in Indonesia,” said the 16-year old student.

Furthermore, she said that Indonesia does not need wastes from the US for its damages to people, water, soil and environment in Indonesia. “My wish is that the US to stop import its waste to Indonesia and take responsibility on the damages,” she said.