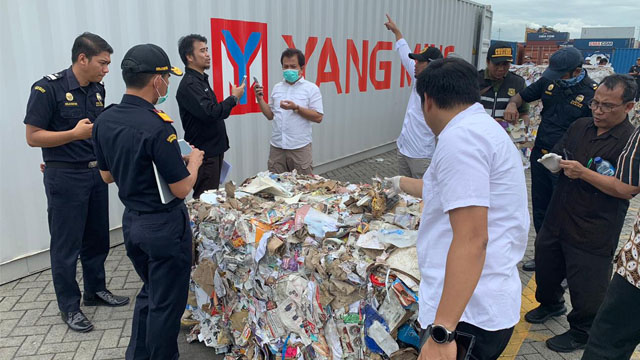 Jakarta (Greeners) – Ministry of Environment and Forestry and Customs on June 14 have witnessed re-export of five containers of waste belong to PT. Adiprima Suraprinta to its origin country, the US.

Rosa Vivien Ratnawati, Director General of Waste Management, Toxic and Hazardous Waste, said based on the import notification letter and permit obtained from Ministry of Trade, the company imports papers.

The permit, Ratnawati said, only allows paper scraps in clean condition, not contaminated with toxic and hazardous waste and not mixed with other wastes.

Furthermore, she said that in the investigation, they found impurities or other wastes, such as shoes, woods, pampers, clothes, used food and beverage packaging, and plastic faucets in large quantities.

Prigi Arisandi, Executive Director of Ecoton, said the smuggling has been going on for the last ten years and Ecoton had reported it to the Ministry of Environment and Forestry since February.

However, the Ministry only responded after the Philippines and Malaysia took firm actions on the smuggling.

“There are still piles of imported waste in several areas such as Karawang, Bekasi, Bogor, Gresik, Malang, Mojokerto, and Sidoarjo, which have been used as dumping sites for imported wastes for many years and involving waste exporters’ responsibility. Law enforcement needs to look into this. I agree that papers import needs to go to red line to be inspected by customs,” said Arisandi to Greeners.Co on Monday (17/06/2019).

Furthermore, he said the re-export needs to be followed up by the Ministry of Environment and Forestry, Ministry of Trade, and Indonesian Pulp and Paper Association, to protest to exporters and encourage origin government to certify waste paper exporters.

“Hence, there will be a list of good and certified exporters because of the sorting system and commitment for waste paper exported to Indonesia has less than one to two percent of contamination or prohibited materials,” he said.