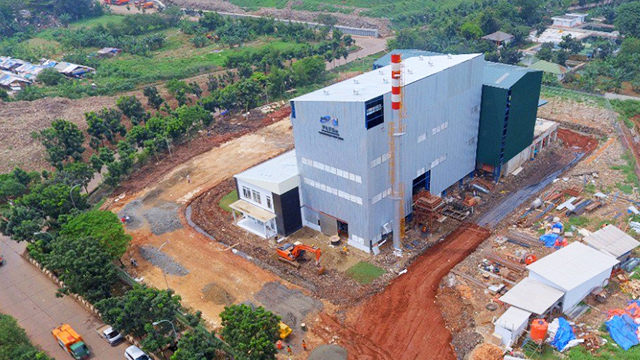 Jakarta (Greeners) – Following the finalization of Merah Putih Waste-To-Energy Plant in Bantar Gebang of Bekasi city, other eleven cities stipulated by the 2018 Presidential Regulation on Waste-To-Energy Plant acceleration to develop the plant are under the spotlight to finish the projects.

However, complicated bidding and third-party collaboration for incinerators development are still hampering their efforts.

Mohamad Nasir, Minister of Research, Technology, and High Technology said that the waste-to-energy plant development in 12 cities must be immediately implemented. To support the acceleration, Minister Nasir said that the Merah Putih Waste-To-Energy Plant model must be certified and included in the e-catalogue of product and service not avoid obstacles to build the plant in regional.

“We are in the state of waste emergency, hence the-12-cities mentioned in the 2018 Presidential Regulation must be pushed [to develop waste-to-energy] plants. The Merah Putih Waste-To-Plant pilot project needs to be certified and included in the e-catalogue of product and service, regulated the price so that mayors or bupatis (red : head of district) are aware and use the e-catalogue from BPPT, that why it no longer needs bidding. Because, the obstacle of waste-to-energy plant is the constant failures of bidding, so it [the development] is not finalized,” said Minister Nasir in Bekasi, on Monday (25/03/2019).

Meanwhile, Rosa Vivien Ratnawati, director general of waste management, toxic and hazardous substances at Ministry of Environment and Forestry, said that it is impossible for BPPT to develop all the waste-to-energy plants. Currently, BPPT can only develop waste-to-energy plant with 100 tons of capacity.

Furthermore, Ratnawati expects for the capacity to be increased.

“Waste-to-energy plant development is not running together. Technology from BPPT is being used but regions also have contracts with other countries, such as Japan and Korea. Because, these areas could not wait for BPPT, so we also receive technology from outside, such as in South Tangerang using [technology] from Korea and Legok Nangka from Japan. I expect for small cities to be able to implement the Bantar Gebang Waste-To-Energy plant,” said Ratnawati to Greeners.

On other cities not included in the presidential regulation, she said that those cities can be included in the inventory to collaborate with BPPT, especially cities having difficulties to find landfills areas.

“It is the state of waste emergency and it is happening in several cities in Indonesia, for example in cities which do not receive Adipura, such as Jakarta, Bekasi, and Medan.Hopefully, they can built the waste-to-energy plant to tackle [waste] issue in the areas,” she said.

Previously, Minister Nasir recommended to Coordinating Minister for Maritime Issues, Luhut Pandjaitan to change the concept of cleanliness, as current responsible is being taken by the government, to be public’s responsibility. For instance, tipping fee or operational, of which he argued public should finance it.

Furthermore, he said that good waste management is to clean the city from waste. However, if the concept is becoming the state’s responsibility by collecting and counted in rupiah, that’s a wrong move.

“I suggested to Coordinating Minister for Maritime issue what if the concept from cleaning waste to be changed because waste is all of our problem, and not just the government. It is true that we can adopt technology from other countries, such as Singapore, Japan, Korea, but we will be doing the design, planning. Bantar Gebang waste-to-energy is proof, so cities like Jakarta, Medan, Bandung, Surabaya, Jogja, Solo, Semarang, and Makassar are included in the-12-cities must be encouraged,” said Minister Nasir.