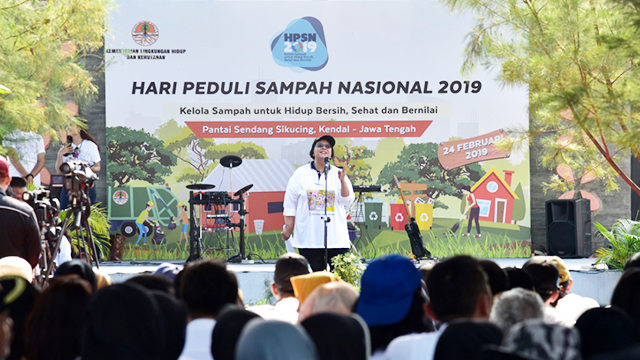 “Government’s plan in 2025 [is] to reduce waste by 30 percent, which mostly coming from households. Currently, those wastes were only reduced by 2.7 to three percent in Indonesia. Hence, people are encouraged to sort, reuse, or recycle,” said Minister Siti at Sendang Sikucing beach, Kendal, on Sunday (24/2/2019).

The event was held simultaneously in eight locations in Central Java, — Kendal, Tegal, Brebes, Pemalang, Batang, Rembang, Jepara and Kebumen –, which have big rivers and beaches.

During the clean up event at Sendang Sikucing beach, waste managed to be collected was 100 kilograms. The event was a follow up of Clean Indonesia Movement launched on 21 February 2019 in Jakarta.

Furthermore, the focus of the movement is to develop a holistic and integrated waste management, including clean rivers, and provide public facilities.

Next, it will revise laws and regulations, and give incentives for companies or private sector or institutions in waste management.

The movement underlines the roles of people to support sanitary and healthy living, in addition to law enforcement.

After attended the clean up event at Sendang Sikucing beach in Kendal, Minister Siti and her staffs visited Jatibarang Landfill located in Semarang city, accompanied by its mayor, Hendrar Prihadi.

She led the ceremony of the event attended by local students and civil organizations. She also handed over sanitary equipment to attendees.

The government supports the project with the issuance of Presidential Regulation No.35 Year 2018 on Environmentally Friendly Waste-To-Energy Installation Development Acceleration. The decree cited Semarang as one of 12 cities stipulated to waste-to-energy plant development.