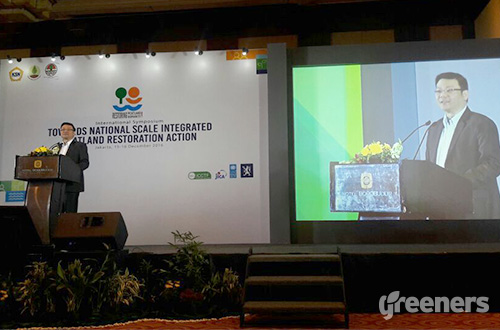 Jakarta (Greeners) – Peatland Restoration Agency or BRG has been developing business models to support its effort to protect peats in the country, said its agency head, Nazir Foead, at a peat symposium, in Jakarta, on Friday (16/12).

“We are building the business models and have been reaching out to World Bank, economists, and universities to develop it. The investors have already reviewed the programs at UN Assembly Meeting in New York, a few months ago,” said Foead.

He added that investors have seen Indonesian government’s seriousness in restoring peatlands and were willing to invest their money.

To ensure the investment returned in time, Foead said that the agency offered business models in investment policy packages.

These economic packages are dubbed as green investments as they were aiming to protect forests and remaining peats through suitable and sustainable practice.

Foead said that four million hectares of peats were damaged and it would require better management and supervision to improve its hydrology function.

He said that investors will receive benefits if they were willing to invest, such as if the program successful, then they will receive the earnings according to agreement. In addition, they would plant sago for production or sorghum for farming.

“Then, investors can also get revenue through carbon market,” he added.

Deputy on Planning and Cooperation at the agency, Budi Wardhana, said that there were options for restoration, — for protected areas and concession areas –. There is also restoration on alternative commodity.

“In the future, we will seek on suitable investment, including on infrastructure and market,” said Wardhana.

Furthermore, he said that the mapping had been done but on village level, with a total 1,280 villages in seven priority provinces or 2.4 million hectares included in the restoration target under the models of village development index, increase livelihood, village spatial planning, and village owned companies.

“Incentives and disincentives also need to be strengthened for each investment. Though, we give it to concessions, we should also give incentives for people,” he said. “It would be useless to aim prosperity without solving the conflict. So, participation will emerged if they given incentive to participate.”

14 Mei 2019
Ministry of Environment and Forestry: Endangered Species Populations in Indonesia are Increasing
News In EnglishMore News in English