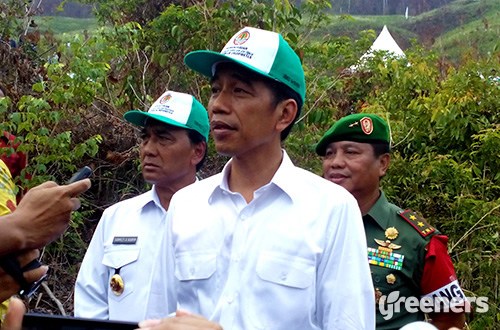 Jakarta (Greeners) – After issuing forest and peatlands moratorium, the government is planning to ban new permits on oil palm and mining concessions.

On May 13, under a presidential instruction, the government ban all new permits on primary forests and peatlands areas.

“There will be oil palm moratorium and mining moratorium,” said President Jokowi at the launch of National Movement on Plants and Wild Animals protection in conjunction with World Forest Day, in Karya Island of Thousand Islands, Jakarta, on Thursday (14/4).

President Jokowi added that current oil palm plantations has been sufficient and need to increase its productivity by maximizing the potentials. Similar to mining, President would not give more permits to companies to open lands.

“Current lands, as long as planted with proper seeds, are enough. It can even double the production. If this is properly done, then it can increase productivity,” he said.

Meanwhile, Tofan Mahdi, spokesman of Indonesian Palm Oil Association (GAPKI), said they could not provide any comment. Mahdi stated that GAPKI continued to communicate with ministry of agriculture, ministry of environment and forestry, and presidential office, to get detailed information on the plan.

“What we can say is oil palm is strategic industry for contributing at least US$ 19 billion in 2015 which is far higher than oil and gas with only US$ 12 billion,” he added.

“President Jokowi had stated that oil palm plantation is national strategic sector and must be maintained. We will monitor the development related to the president’s statement,” he said.