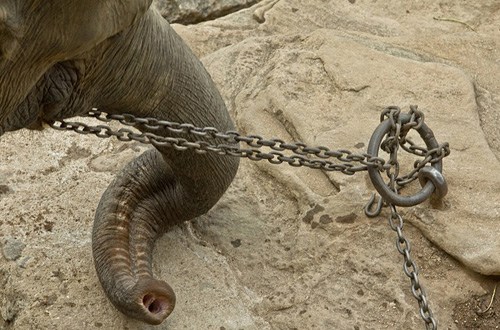 Jakarta (Greeners) – At least two elephant killings happened in Sumatra, on February. An elephant carcass found at Rawabundar, Section II Way Kanan, Way Kambas National Park, Lampung, on 25th of February. The head was cut off and its teeth and tusks went missing.

Illegal wildlife trading poses major threat for animals followed by deforestation. For the past two decades, between 1990 to 2010, Sumatra island lost 7.54 million hectares of primary forests and 2.31 millions hectares are degraded.

Minister of Environment and Forestry Siti Nurbaya Bakar said that wildlife has been the toughest environmental issues in Indonesia.
There were several factors, Minister Siti added, such as land allocation, forest management, illegal logging, illegal mining, and illegal wildlife trading.

“Illegal trading and poaching stand out in wildlife issue. We followed up cases from the media and learned the intensity of these cases. Most of the elephant killings led to illegal trading because they were after the tusks,” said Minister Siti at International Wildlife Day in Jakarta, on Thursday (03/03).

Based on the ministry’s data, illegal trading ranked second after drugs trading as crucial case. As a result, government has been pushing efforts to protect and conserve wildlife.

“We will continue to increase [population] up to five percent per year for each protected animals. There were a total of eight rhinoceros gave birth in 2015-16. Elephants can go bigger than that number,” she said.

Its natural habitat is pushed by concessions of companies lead to conflict between elephant and human living near forest areas.

Two people were killed and one injured from conflict occurred from 2014 to 2015 in Tebo, Jambi.

“Meanwhile, a total of 12 elephants were found dead because of conflicts and hunting,” said Jeri.

Based on UN data, one hundred thousands elephants were killed between 2010-12 only for their tusks. It led to an international calling, including on www.wildlifeday.org, to save wildlife, especially elephants.

The International Union for Conservation of Nature and Natural Resources (IUCN) listed Sumatran elephant as Critically Endangered in 2015 as a result of only 680 elephants found in its habitat (Ministry of Environment and Forestry, 2007).

Sumatran elephant can still be found in Seulawah-Ulu Masen, northern part of Leuser ecosystem, Bukit Tigapuluh National Park, southern part of Kerinci Seblat, Way Kambas National Park, and Bukit Barisan Selatan National Park. However, their existence is under constant if there are no protection plans.