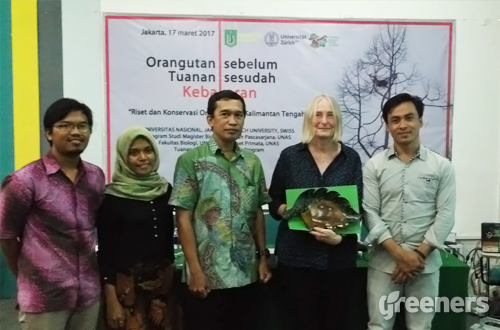 Mawas Conservation Program is a program set up by Borneo Orangutan Survival Foundation (BOS), a non government organization aim to protect 309,806 hectares of forest areas with 3,000 wild orangutans and other biodiversity.

The loss of six percent of forest areas means it would not be able to provide food for orangutans. Consequently, wild orangutans moved to other parts of the forest to survive.

Maria van Noordwijk, one of BOS researcher, studied the migration pattern which revealed that female orangutans tend to move away from fires.

“Female orangutans that we found usually carried their children. Initially, it was good news to use as females have important role for behavior development of the children,” said Noordwijk in a seminar in Jakarta, on Friday (17/3).

Furthermore, she said that young orangutans need role model similar to humans. To survive, the children will follow all activities done by their parents. In addition, they also need to play so they could interact with other young orangutans.

However, the interaction serve as sharing information activities for orangutans to survive.

She said that females have more steady roaming area meaning that evicted orangutans will have difficulties in finding new habitat. As a result, there were cases of female orangutans attacking each other to protect their areas back in 2016.

In addition, moving wild orangutans will also change their diet, from fruits to figs, flower root, even insects and termites as fires destroyed the fruit trees in their habitat.

Maria van Noordwijk is a Dutch research who has been studying orangutan behavior for the past 40 years.

She expressed her concerns on the changes of Tuanan orangutan behavior resulted from forest fires.

“Without humans, there will be no global warming phenomenon leading to forest fires. But, it has happened, we need to do something. If we act fast, we can prevent something bad to happen. The same thing with cutting trees. There’s no need to save orangutans,” said Noordwijk.