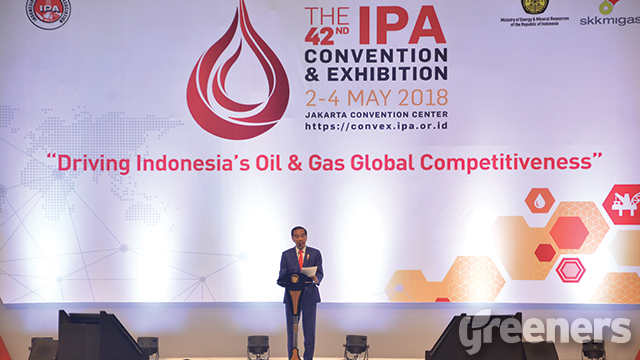 “For instance, Pertamina [Indonesia’s State-Owned Company], from the information I receive, up to date there has never been any massive exploration since 1970s, only small exploration. What is going on? So, I instructed Minister of Energy and Mineral Resources to cut regulations in the ministry,” said President Widodo at the opening of the 42th Indonesian Petroleum Association (IPA) Convention and Exhibition in Jakarta.

President Widodo said that the government has launched Making Indonesia 4.0 as part of the country’s response to Industrial Revolution 4.0 adding that revolution in renewable energy technology can cut demands on oil and gas in future years.

“Technology revolution in renewable energy sector will reduce demands on oil and gas for years to come but I don’t believe this. [We] will still need [oil and gas]. Why oil and gas demand is declining? Because of electric vehicles,” said President Widodo.

Based on Presidential Regulation issued in 2017, Indonesia’s energy mix is 44 percent of oil and gas by 2050.

“From that data, it can be concluded that oil and gas are the backbones of national energy within 20 to 30 years,” said Gunawan. “To address the gap, we would need large investment to explore for new oil and gas sources.”

Minister of Energy and Mineral Resources Ignatius Jonan said that oil and gas upstream industries are Indonesia’s economic growth contributor and the government is trying all efforts to speed up business process in the country by reducing numbers of permits and bureaucracy reform.

Meanwhile, head of Oil and Gas Special Working Task, Amien Sunaryadi said that communication and hard work are required from all stakeholders in the upstream industries to be able to raise competitiveness in Indonesia.

“We are sure that oil and gas industry will stay in Indonesia as global demands keep on increasing. [The] industry is facing challenges which force us all to be creative and innovative in efficiency and increase competitiveness,” said Sunaryadi.