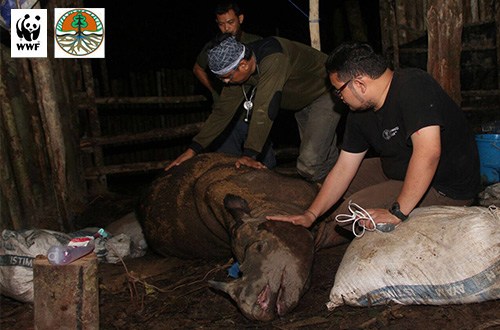 Jakarta (Greeners) – The death of Najaq, a female Sumatran rhino on Tuesday, was shocking to conservationists not just Indonesia but the whole world.

As a follow up, Director of Biodiversity Conservation at Ministry of Environment and Forestry, Bambang Dahono Adji, said that Najaq will be preserved for scientific research and tourism.

“Najaq will preserve for scientific research and tourism as evidence that Sumatran rhino does exist,” he said to Greeners in Jakarta, on Wednesday (06/4).

However, he said that they would still have to wait for the autopsy to be finalized to determine where she will be placed.

He cited museum for endangered species at Safari Park or specific location made for rhino as potential candidates.

“Currently, we’re waiting for the autopsy so there’s no decision yet where to place her. We do have museum in Jatim Park or museum in Jakarta. We’re still planning on how to move her,” he added.

Najaq was suspected to die from severe infection resulted from snare trapped on her left leg.

The ten years old was trapped since September 2015. She managed to let loose but some of the snare remain in her skin.

“The medicine given by the doctors was responding positively. However, the wound was severe and causing infection. Details of her death will be revealed after the autopsy is completed,” said Muhammad Agil, one of the vets, on a press release, on Tuesday (05/4).

Najaq was captured by camera trap with snare attached to her leg prompted efforts to catch her and tend to her wound, on October 2015.

She was caught on March 12 and given antibiotics and anti inflammation medicines also vitamins from the doctors of ministry of environment and forestry, Indonesia Safari Park, Indonesia Rhino Foundation, Bogor Agricultural Institute and WWF – Indonesia.

She was reported getting better indicated from her healthy appetite though her leg was still infected. However, her condition was declining in the past few days followed by her death.