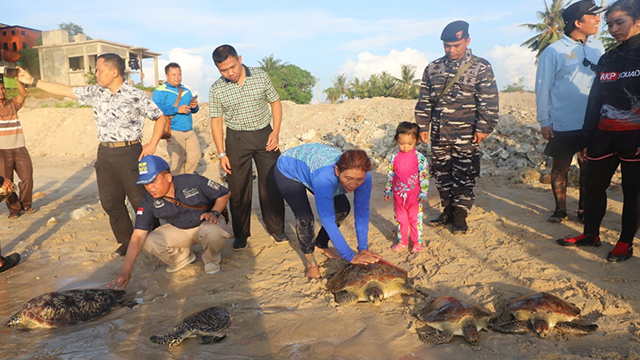 Natuna (Greeners) – At least 30 turtles, mostly confiscated from illegal use, released in Natuna waters of Riau island on Sunday (05/05/2019).

“At least 25 green sea turtles and 5 hawksbill turtles released are parts of evidence of illegal use of protected turtles in Batam foiled successfully by Riau Islands police,” said Agus Suherman, acting director general of marine resources and fisheries monitoring in a press release to Greeners on Monday (06/05/2019).

Turtle is one of the protected species based on national and international regulations because facing threats from nature and human activities.

READ ALSO: LIPI: Indonesia’s Marine Potential Worth of US$124 Billion

Minister of Marine and Fisheries Affairs, Susi Pudjiastuti, said that the ministry had issued letters to regional heads to improve consultation on regulations related to protect turtles from extinction.

Furthermore, Minister Susi also expects regional administrations to coordination in preventing, monitoring and law enforcement for turtle protection, eggs, and other parts, to protect its breeding habitat, and monitor all turtle protection programs.

“I encourage for all law enforcement to work hard to protect and save our marine resources from irresponsible people, especially illegal protected species trade,” she said.

Previously, on 19 April 2019, water police have foiled illegal use of turtles and suspected to be traded. At least 148 turtles saved by the police, with 118 still alive and 30 were dead.