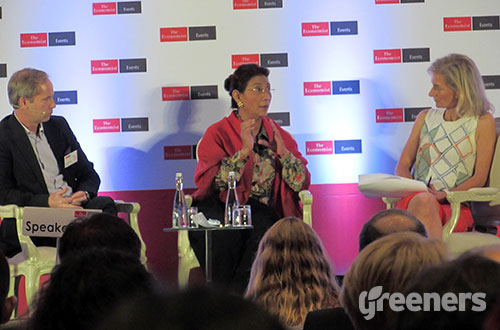 Minister of Marine Affairs and Fisheries, Susi Pudjiastuti (in the middle) at the closing of World Ocean Summit 2017, in Nusa Dua, Bali, on Friday (24/2). Photo: greeners.co/Ramandha Suci Marchita

Nusa Dua (Greeners) – As Indonesia being dubbed as second largest plastic waste producer, Minister of Marine Affairs and Fisheries, Susi Pudjiastuti, said that her office would take more concerns on the issue commenting on the bad waste management in Bali.

As Bali has more popularity compare to Indonesia, its bad waste management will influence the country, Minister Susi added that it was more than important to set up the strategy for people’s behavior.

“Piles of waste means diseases. It got worst if they reach oceans. The government wants to encourage marine tourism. We are trying to sell the beauty of our marine ecosystem and sanitary is important. If the oceans filled with plastic, no tourists will want to stay. So, Bali has to become exemplary for nice, clean, beautiful marine tourism with diverse cultural background so tourists will want to come and stay longer,” she said at the closing of World Ocean Summit 2017, in Nusa Dua, Bali, on Friday (24/2).

Furthermore, she said that the minister has been discussing the issue with ministry of environment and forestry which had reached several solutions.

First, set up nets on river banks to reduce waste from the rivers to go straight to the sea. Second, issue a regional regulation which will manage customary celebration in the seas so it will not leave lots of plastic waste.

“I also suggests for sanction for those littering because without [regulation] will not take place. For instance, in Pangandaran, those who litter will be fined and the one reported it will get 50 percent from the fine. I think it can be applied in Bali so it could change people’s behavior to treat waste properly,” she said.

Degradable plastic waste to become micro-plastic, not only threaten ecosystem and its habitat, but also polluting the food chain. The biggest threat from micro-plastic is contamination on ecosystem/habitat.

Plastic waste got stuck on mangrove roots will pollute and disturb the ecosystem which would destroy the seeds. In addition, the waste could also increase toxicity and cause damages on coral reefs, or strangle and being eaten by other species.

Minister of Marine Affairs and Fisheries have implemented plastic waste management for coastal and oceans through its 2015 directorate general regulation on Waste Management Guidance At Beach Culinary Tourism followed by Domestic Waste Pollution Management Guide in Coastal Areas through posters, leaflets, and movies.