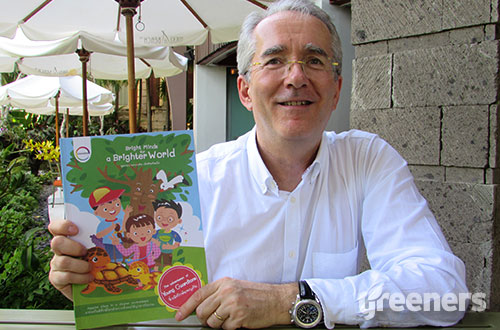 Patrick Thomas, Plastic Europe President and member of World Plastic Council, said that bad consumption has led to increasing waste volume that people have yet to aware if disasters hit them back.

“The bad consumptive attitude has become an issue hard to crack in dealing with waste,” said Thomas to Greeners at the sideline of World Ocean Summit 2017, in Nusa Dua, Bali, on Friday (24/2).

He cited smartphones of which people neglected to include the considerations if the phones were broken where they’re going to throw or whether there was a policy from the producer to recycle components of their phones.

Furthermore, he said people tend not to think long term environmental impacts from their consumption which made it difficult to manage waste. No matter how good the manage was, he added, if people’s consumptive attitude was not upgraded then it would simply reduce and not solved it.

“If we bought plastic bottle water, there’s a seal on the top. Where do you throw that seal? Then, the plastic of the cover, where will it go? After you drink it, where will the glass go? Do you just throw it away? One throw can be dangerous, so thousands throws can be disastrous,” he underlined.

Thomas reminded public to understand and have knowledge on producers with good waste management practices. In addition, strong regulation from the government must be properly disseminated.

He appreciated Indonesia’s movement to apply paid plastic system to consumers. It should have been a doorway to change people’s behavior if properly promoted.

“This regulation is important but it will be worthless if the message does not reach to local levels,” he said.

To change behavior and increase awareness on the danger of not-managed waste, it should start early as possible on children. The practice has been going on in Thailand with interesting educational approach which will build children’s knowledge.

Children, he said, will be more aware and understand even police their own parents on mishandling the waste.

“In Thailand, I used educational approach by providing children’s book and also interaction. The books introduce on types of waste, how to manage 3R, — Reduce, Reuse and Recycle –, and how beautiful our lands and oceans without waste,” he said.

Ocean waste plastic issues have strong relation with waste from the land. Everyone does not like to see plastic as it’s too valuable to be thrown away. So, how to prevent plastic waste from reaching to the sea?

Thomas said that plastic waste was not solved so it presented similar issue for the oceans.

He said that it would need serious and integrated waste management to solve the problem.

Don’t Blame It on Plastic

Thomas said that no humans, if they’re aware about it, wouldn’t like to see their plastic waste ended up in the oceans.

“Why? Because, plastic is recyclable and the business is booming and profitable. Plastic has become the future economical needs sought by countries with high demand recycling business industry. So, don’t blame it on plastic but try to change the consumption attitude and be more wise in manage your own waste,” he said.