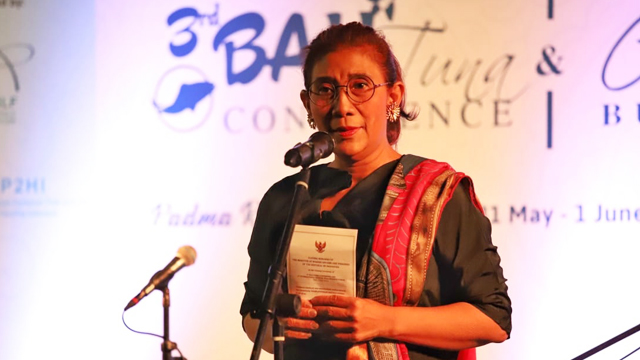 “Business people must be able to monitor their product’s traceability. That goes for certification because without certification, transaction will be difficult, probably fail,” said Susi Pudjiastuti in Bali, on Friday (1/6).

Minister Pudjiastuti added that with certification, Indonesia’s tuna can achieve premium price to be able to be competitive in the world market.

“And, we hope our [Indonesia’s] leadership will be followed by other nations as tuna is world’s resources not just belong to Indonesia so that other countries can learn from us,” she said. “We protect oceans, we gain from oceans. That’s the message, that you need to exploit nature in the right way by preserving its sustainability so [tuna] can still exist and plentiful in the oceans. But, if there are lacking then it would not be good for business.”

“In the meanwhile, with proper policy tuna can be caught by all fishermen. Currently, tuna does not belong only to major long liners vessels, not only belong to foreign long liners, but also [belong to] Jembrana fishermen, Banda Naira fishermen, East Nusa Tenggara fishermen, Sendang Biru fishermen all [fishermen] can get tuna. There are big size and close, no need to go farther to the oceans,” she added.

Furthermore, she underlined that Indonesia rejected fisheries products caught up in the middle of human rights violation.

“We have [agreed to] human rights compliance. That is one the requirements to obtain premium certification. So, the world do care about sustainability, the world care about human rights. We can no longer practice industrial management as we wish. World’s regulation, world’s standards. And, we all have gone to better direction which is sustainability,” she said.

Based on FAO data, through SOFIA in 2016, there is 7.7 metric tons of tuna and fish species similar to tuna being caught globally. In the same year, Indonesia had supplied more than 16 percent of world’s production with tuna, skipjack, and cob fishes production reaching more than 1.2 million tons per year of average. Meanwhile, Indonesia’s tuna export reached to 198,131 tons with US$ 659.99 million in 2017 (Rp 9.2 trillion).

Indonesian government has commitment and consistency to support tuna conservation and management through its Tuna, Skipjack and Cob Fisheries Management which was launched at the 1st Tuna Conference in Bali followed by the issuance of ministerial decision in 2015.

The National Tuna Management Plan was established to implement regulations and standards adopted from Regional Fisheries Management Organizations (RFMOs) where Indonesia is a participant at the Indian Ocean Tuna Commission (IOTC), The Western and Central Pacific Fisheries Commission (WCPFC), The Commission for the Conservation of Southern Bluefin Tuna (CCSBT) and Inter-American Tropical Tuna Commission (IATTC).