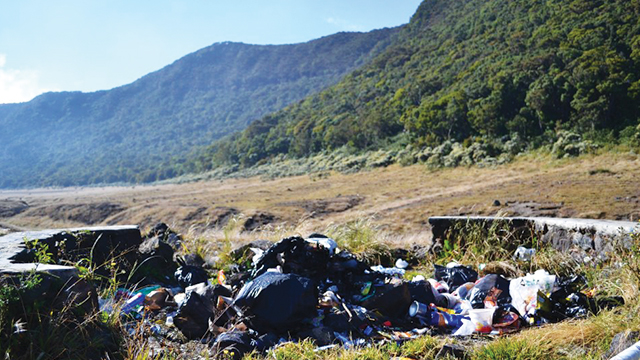 Jakarta (Greeners) – The United Nations declared 11 December as International Mountain Day in 2003, aiming to increase public awareness on the importance of mountains for ecosystem, Earth, and humans. However, waste issues produced by hiking and climbing activities still continues.

Nevertheless, it could not contain the amount of waste resulted from increasing hiking activities.

“On waste issues in mountains, ministry of environment and forestry had given waste management guidance to them [head of national parks] such as collecting, transporting, processing, and recycling wastes modeled or adapted for their national parks,” said Tahar to Greeners on Tuesday (11/12/2018). “For example, Ciremai Mountain National Park applies the concept that wastes are the responsibility of each hikers.”

Sudiyono, head of Ciremai Mountain National Park, said that the national park applies a mechanism dubbed as check in – check out where officials will be checking the entrance tickets and items of hikers’ potential.

The hikers will be given a list to fill up on the items potentially turned into wastes during hiking. The list must be submitted at the exit gate by the hikers for checking for wastes.

“Currently, we are checking in average four hikers with three kilogram of wastes and up to this date [second week of December 2018], there are 138 hikers climbing Mount Ciremai. The number is a lot less as we only open one track, the Aik Berik track,” he said.

Rizki said that national parks management is improving, however awareness of hikers not to litter is still lacking.

“In several mountains that I have climbed, waste management by the management is good, especially mountains located in national parks, such as Gede Pangrango and Semeru mountains. They provide trash bins and ban all items that can damage nature before climbing. So, there are regulations on what allowed and not allowed during hiking,” he added.

However, he said that officials of national parks don’t always check the items due to the volume of hikers.

“It depends on hikers’ conscience, not just the management as they have been giving instructions. As far as I know each national park held conservation time every year to clean up the wastes and greening the areas,” he said.
“The problem is lack of environmental education.”

Meanwhile, Tahar said that hikers need to follow the regulation stipulated by national parks management as it is difficult for the state to work by itself without public support.

International Mountain Day is held under the coordination of Food and Agriculture Organization or FAO. This year’s theme is #MountainsMatter.

Based on FAO data, mountains provide 60-80 percent of freshwater on Earth and home to at least a quarter of terrestrial biodiversity.