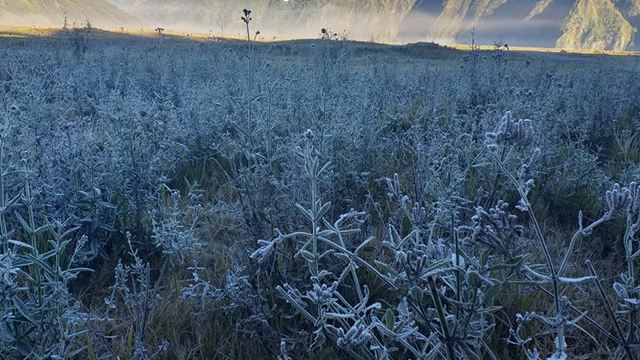 Jakarta (Greeners) – Cold temperature resulted to frost in Dieng’s highland for the past few days, however, Meteorology, Climatology, and Geophysics Agency or BMKG, states that the condition is a normal phenomena.

R. Mulyono R. Prabowo, deputy of Meteorology at the agency, said that for the past few days, cold temperature hits southern part of Indonesia, especially Java to Nusa Tenggara with significant drop during the nights. Generally, cold temperature occurs as a result of cold air mass flow and dry from Australia continent, or known as Australia’s cold monsoon flow.

“Based on climatology, Australia’s cold monsoon flow active during June-July-August, which is the peak of dry season in southern part of Indonesia. The push of dry and cold air flow from Australia is bringing relatively cold air, especially at nights and can significantly felt in high lands or mountains,” said Mulyono on his press release on Wednesday (26/06/2019).

Indonesia’s monsoon happens every year, however it is different this year and resulted to colder weather. Furthermore, he said that dry season with bright weather and atmosphere with clouds slightly covering Java-Nusa Tenggara, can maximize Earth’s heat to the atmosphere at nights.

Based on BMKG data, temperature drops 15 Celsius degrees in several areas, such as in Frans Sales Lega of East Nusa Tenggara and Tretes of Pasuruan for the past week.

The lowest weather in Frans Sales Lega of East Nusa Tenggara was 9.2 Celsius degrees on 15 June 2019. Furthermore, he said that cold weather will be impacting Dieng highland of Central Java or other mountainous areas where extreme condition can form frost, similar to Bromo Tengger Semeru National Park of East Java.

“It is predicted that cold weather such as this can go on during the peak of dry season, — June-July-August –, especially in Java to Nusa Tenggara,” he said. Meanwhile, Kadarsah, head of climate change at the agency, said that the lowest temperature resulted to frost happened on 14-21 June 2011, reached to six Celsius degrees because of Dieng’s heavy crater eruption.

He said that if referring to lowest temperature in Dieng, then the lowest happened on June 20 with 4.5 Celsius degrees.

Furthermore, he said that end of low temperature in Dieng will happen as east monsoon wind from Australia is over.