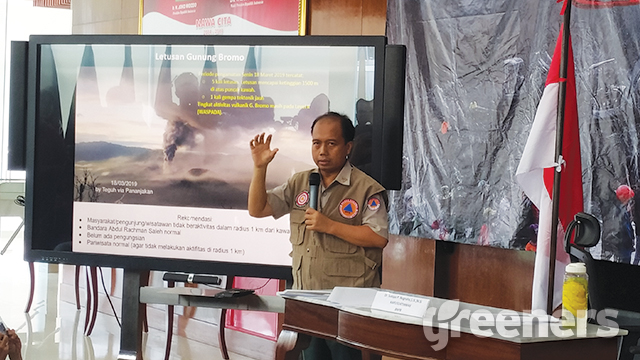 The agency adds more than 98 percent of disaster occurred was hydro-meteorology and two percent was geology disaster.

Sutopo Purwo Nugroho, head of Information Data and Public Relations of the agency, said that during the period, there were three disasters resulted to massive casualties and damages.

First, the flloods and landslides in South Sulawesi on 22 January 2019 with 82 killed, three missing and 47 injured. Infrastructure damage and loss are Rp926 billion or US$64 million.

Second, the floods and landslides in Sentani of Papua on 16 March 2019 with 112 died, 82 missing and 965 injured. Infrastructure damage and loss are Rp668 billion or US$46 million.

Third, the floods and landslides in Bengkulu on 27 April 2019 resulted to 29 killed, 13 missing and four injured. Infrastructure damage and loss is predicted to have reached Rp200 billion or US$13 million.

Based on a press release to Greeners, province with high disaster rate are Central Java with 472 events, West Java with 367 events, East Java with 245 events, South Sulawesi with 70 events and Aceh with 51 events.

Meanwhile, districts with high disaster rate are Sukabumi with 50 events, Semarang with 43 events, Borgor with 42 events, Majalengka with 38 events and Temanggung with 37 events.

“The disaster statistic is not just about numbers, but it has meaning that threats of disasters will continue to rise. Increasing disasters in 2019 are caused by floods and landslides triggered by torrent rainfalls. The combination of nature and anthropocentric is the main reason for increasing disasters,” he said.

Furthermore, he said that disaster will continue to increase in Indonesia. The impacts of disasters are also high. Hence, disasters are not resulted to casualties and building damages, but economical loss which would reduce development growth.

Public awareness for massive disaster is still lacking because good mitigation, structural and non-structural, has yet to become priority in regional development.

He adds most of disaster mitigation still focusing on disaster emergency.

13 Agu 2018
Scientists: Flores Back Arc Thrust, the Cause of Lombok Earthquakes
ARTIKEL LAINNYA