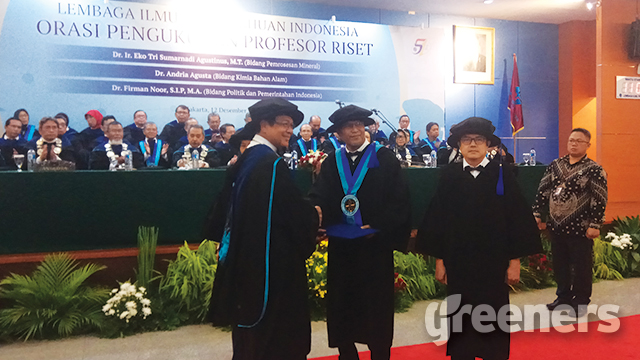 On his speech, Agusta underlined the importance to develop endophytic fungi to support antibiotics independence in Indonesia.

Indonesia is home to at least 4,000 plants throughout the country. It is predicted 1.5 million of living microbes on Earth, however less than ten percent has been identified.

“With ideal nature condition to grow and develop for microbes, it is an irony that there is no antibiotics produced by microbes from Indonesia up to date. Even now, Indonesia still faces health issues, including its dependency on imported medicines,” he said in Jakarta, on Wednesday (12/12/2018).

Based on data of Ministry of Commerce, more than 95 percent medicinal raw materials are imported with the total value of Rp11.66 trillion (US$800 million) in 2016. From the number, antibiotics contribute the largest portion with US$91.3 million or Rp1.37 trillion in 2014.

Furthermore, he said that endophytic fungi is unique and special in producing chemical compounds to be used by humans, such as antibiotics.

There are more than 1,000 endophytic fungal isolates have been collected and filtered, biologically, either as anti-bacteria, anti-fungal and anti-oxidant, between 2001 to 2018.

“So, the antibiotics research which I developed, the (+)-2.2′-Episitoskirin A of Endophytic Fungi chemical compound. This compound will be used as antibiotics for infections, in the form of cream, to heal burns such as abscess, scab, and boils,” he said.

Furthermore, he said that the compound is the candidate for his research and its development was completely conducted in Indonesia without the support of foreign researchers to prove that Indonesia can explore its own biodiversity potential for medicines.

In addition, he encouraged the government to continue his research as domestic companies went bankrupt for losing the competition with foreign pharmacies. There are no regulations or policies to regulate importing medicines.

“Current challenge is that our market is too free, there is no protection for domestic medicines and regulation for free imported medicines. For example, the amoxicillin factory was operating with good quality but lost to cheap and low quality from China. Unfortunately, people still see the cheap price of a product so within two years, the factory went bankrupt,” he said.

With this success, he had hoped the compound could trigger the research of antibiotics made in Indonesia which could substitute millions of dollars of imported antibiotics per year.

7 Mar 2019
Minister of Environment and Forestry: Paid Plastic Bag Policy Should Not be Charged to Public
News In EnglishMore News in English