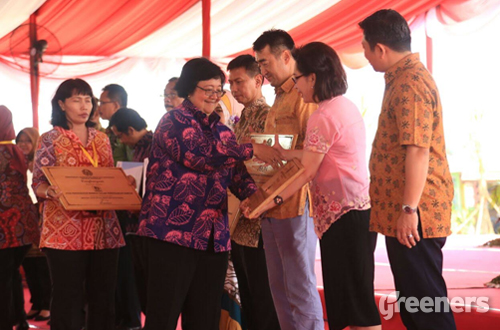 Surabaya (Greeners) – Ministry of Environment and Forestry awarded four companies for their waste management on Tuesday (28/2), in Kenjeran, Surabaya of East Java province.

Furthermore, Minister Siti said that Free Waste 2020 target could be achieved as supports from communities and business world have been increasing each year.

“Facilitators, communities and collaborators showed significant increase from year to year. The support from academician and business world, along with activities, has been flowing in the field,” she said at the award show.

From an official press release, Minister Siti said that her office had been following the development of environmental communities, either from waste care, goodbye plastic, river, mountain lover communities, to business people and associations.

As February named as the Waste Management Month, it was expected the campaign could spread massively and organized.

READ ALSO: Ministry of Marine Affairs and Fisheries Will Focus On Ocean and Coastal Plastic Waste

VP. General Secretary Danone Indonesia, Leila Djafaar said that the company has applied corporate’s responsibility on waste management. It was the second award after last year they earned an award for the category initiative on plastic waste management.

“This year, we are selected for our performance as producer in waste management,” said Djafaar.

Furthermore, she said AQUA Group added waste collection locations in the last process. After managed three Recycling Business Unit in South Tangerang, Bali and Bandung, the company will cooperate with other stakeholders, including waste bank and collectors in Bogor and Jakarta as part of their expansion to collect their wastes.

Furthermore, she appreciates government to encourage and support private sectors to keep innovating in managing their wastes. In addition, AQUA group had developed Recycling Business Unit in South Tangerang, which serves as business model for plastic recycling with 44 employees.

At RBU, plastic bottles are being destroyed and turned them into creative items such as t-shirts and other plastic products.

“RBU that we run give health insurance through BPJS to each employees. 75 percent of the employees are scavengers. 75 percent are women which have difficulties to access health care,” she said.