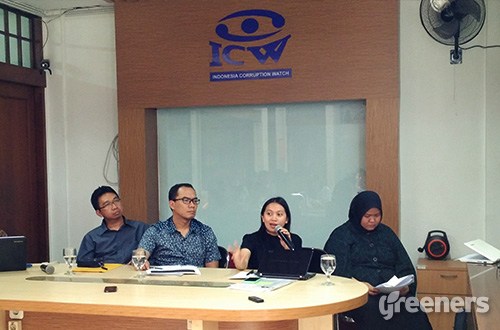 Jakarta (Greeners) – Indonesian Corruption Watch (ICW) found challenges in its budget tracking research in forestry sector as they had troubles in obtaining wood production data from central and local governments, said the team, in Jakarta, on Thursday (28/7).

The wood production data is crucial in determining Non-Tax State Revenue which generates from Forest Provision and Rehabilitation Fund.

Head of Research Division Siti Juliantari said that Indonesia was predicted to have lost Rp 1.3 trillion due to discrepancy data of forestry sector from Ministry of Environment and Forestry, Statistic Indonesia, and Central Government Finance Report.

READ ALSO: SVLK is the Answer to Sustainable Forestry Business

Juliantari said that the state should have received a potential of Rp 3.6 trillion from Forest Provision and Rp 5 trillion from Rehabilitation Fund based on Statistic Indonesia and Central Government Finance Report data.

However, during three months of investigation, ICW discovered discrepancies between the three agencies.

“ICW findings revealed that based on government finance report 2012-14, the state only received Rp 2.5 trillion from forest provision and Rp 5,090 trillion from rehabilitation fund,” she said.

Indonesia’s Audit Board (BPK) auditor Juandi added that the agency also discovered that the ministry has lacked in monitoring over management, counting, and inventorying forest provision, either in the central and regional.

Juandi predicted that weak monitoring of the ministry was caused by regional autonomy as local government had failed to report non-tax income in forestry sector to the ministry.

“Unfortunately, only ten out of 34 provinces have submitted their reports, though still not routine,” he said adding that the rest had never submitted any reports throughout 2015.