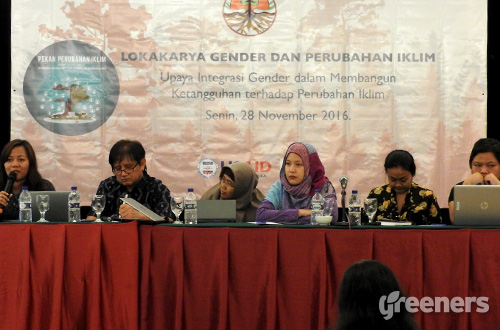 Jakarta (Greeners) – Climate change impacts on women are often neglected as men are still considered the sole provider for the family. This leads women’s roles, in the economic sense, are put aside. For example, women are not categorized as fishermen or farmers, the most prone professions to have had hit by climate change impacts.

“In Southeast Sulawesi and Maluku, there are women working as fishermen, such as Bajo tribe. They are fishing clamps, or locally know as meti-meti but not officially registered as fishermen by statistics, which denied them access for fishermen, said Irmia Fitriyah, Gender Specialist of Climate Change Adaptation and Resilience, USAID, in Jakarta, on Tuesday (29/11).

Furthermore, Fitriyah said that lack of separate data between women and men was making adaptation programs for vulnerable groups, especially women, children and disable people, were unavailable. Meanwhile, budget allocation for adaptation and mitigation programs are the key to develop resilience in local levels.

Ciput Eka Purwianti, head of Gender Equality in Science and Technology of Ministry of Women’s Empowerment and Child’s Protection, said that the ministry had issued technical guidance to integrate gender into climate change adaptation for local governments.

“The guidance is expected to be used by local governments to develop policies, programs, and activities which are gender responsive through planning and budgeting documents, including Climate Resilient Strategy and Regional Middle Term Development Plan (RPJMD),” she added.

Director of PATTIRO, Maya Rostanty, said “From our experience in six villages in Malang district, women must also be included in the budgeting plan process in villages. This process must begin by voicing out their needs and translated into the actions.”

Rostanty said that the action plan would be submitted to Village Working Plan to be able to be accommodated in the Village Budget Plan. (*)