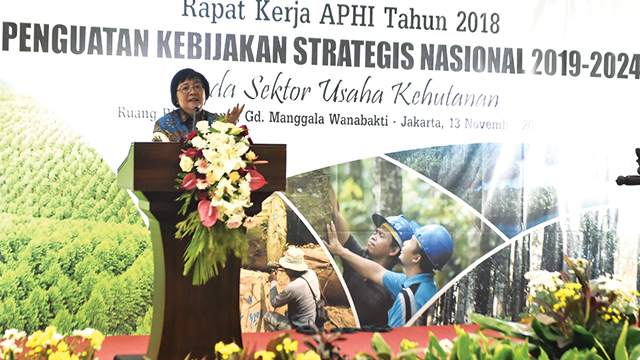 “The revenue came from processed timber export which tend to increase from round timber production and it was dominated from plantation forests. Countries in Asia, North America and European Union dominated the export destinations of Indonesia’s processed timber,” said Minister Siti, in Jakarta, on Tuesday (13/11/2018).

China ranked as the first country for Indonesia’s processed timber, which increase its demands to 18.52 percent compare 2017. Japan and US followed in the second and third place, respectively. European Union was the third place in 2017.

Head of APHI, Indroyono Soesilo, said that the business sector is optimistic about 2019 although the year will face the trade war between US and China and national election.

“The foundation of the upstream sector performance in 2018 is strong, including there is indication of improved timber prices, positive trend on national timber production increase, and increase on sustainable forest certification,” said Soesilo.

Furthermore, he said that the performance of permit holders of timber forest products utilization is positive. The performance, which is reportedly increasing for mandatory or voluntary, is measured from the issuance of sustainable forest certification or Timber Legality Verification System (or SVLK).

He said to strengthen the performance in the upstream sector, APHI is working with PNORS Technology to develop online based marketing and trading system based on SVLK of Indonesia Timber Exchange System/E-Commerce. The system was launched by first export to US by earlier this year in Semarang.

“The system has been perfected and we are ready to facilitate APHI members and forestry industry or exporter. The system to market woods and timber products connect with domestic and world markets network,” he said.